When talking about propellers, size does matter. 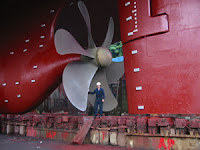 A propeller is a type of fan that transmits power by converting rotational motion into thrust. A pressure difference is produced between the forward and rear surfaces of the airfoil shaped blades, and a fluid (such as air or water) is accelerated by the pressure difference. Propeller dynamics, like those of aircraft wings can be modelled by Bernoulli's principle and Newton's third law.

The Propelify Innovation Festival is coming to Pier A Park in Hoboken, NJ on October 3rd.

Earlier this year, the New Jersey Tech Council, the state's largest technology trade organization, appointed Aaron Price as its new CEO - and also acquired Propelify - one of the largest communities of entrepreneurs and innovators and the producer of the Propelify Innovation Festival.

Aaron Price started Propelify with the inaugural Innovation Festival in 2016 and a mission to "inspire the tech and innovation community and those who take action - who propel." Since its launch the Festival has grown into one of the world's largest tech events, with 8,000+ entrepreneurs, influencers and policy makers.

The New Jersey Tech Council (www.njtc.org) provides business development, education, networking and advocacy for the region's technology businesses. By collectively representing tech, life science and tech-related companies and organizations the Tech Council has the unique ability to offer opportunities to learn, network and grow - to nurture the tech and STEM talent pipeline critical to growth and to provide access to financing sources.

So NJTC aquired Propelify, and the NJTC gets Aaron Price as their new CEO in the process. Brilliant.

Now let's make it even better.

NYDLA.org members attend Propelify for free ($99 savings) and go home with $1000+ in "swag" from our vendors and sponsors. Just fill our the form on NYDLA.org and you're all set.

NYDLA and NJTC have similar missions - to support tech, innovation, and entrepreneurial ecosystems across the state and region. I really don't know who invented the propeller. It might have been Archimedes. Maybe it was Leonardo da Vinci. Could have been the Egyptians. But we DO know who invented Propelify.

In business, there are many factors to consider when contemplating your next move. Facebook Chief Operating Officer Sheryl Sandberg once received advice from Eric Schmidt in 2001, when he was Google's CEO: "If you are offered a seat on a rocket ship, you don't ask what seat. You just get on."

In that spirit, when someone offers you a free ticket to Propelify, you go.

I'll see you at Pier A Park this Thursday - let's Propel!

Posted by Thomas Capone at 5:12 AM