A friend of a friend 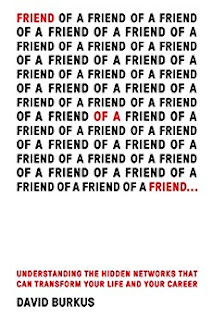 My friend David Burkus has a new book, "Friend of a Friend: Understanding the Hidden Networks That Can Transform Your Life and Your Career."  For some reason, if you hustle, you can get the book for FREE if you are an Amazon Prime customer. If you are a Prime customer - do it!

Several years ago, we had a major snow storm. We were snowbound for a few days. I even blogged on it, telling how I listened to all (ALL) of David's archived podcasts while we were all stuck at home. You can read that blog from 2016 for the backstory, but I'm going to bounce around a little here, from the past to present day.

Because of the snow storm, I met David. First virtually, and I met David one day for dinner in NYC (he paid - nice guy). David made his way to the "talent" page of NYDLA.org - as did many of his "friends" from his podcast archive - his friends who then became MY friends. Ah yes, a friend of a friend in action.

Many (many) years ago, I ran MTP - MaritimeTechnologyPartners.com and we sold telecommunications and technology to the Maritime industry. After 9/11 this was a very hot business.

As a good salesman should, I attended a DHS.gov event at NJIT, and there I met Michael Chumer who was presenting about Port Security.

I must have asked good questions from the audience, because I got invited by my new friend Michael to attend a DHS.gov event at Picatinny Arsenal in New Jersey the very next day.

While at the Picatinny Arsenal event I met Mitchell Erickson of DHS.gov and we became friends. I told Mitch about my plans to reboot and "give some oxygen" to NYDLA.org which (at the time) was going (already was?) bankrupt. The website was 90 days past due on its hosting fees. I had an opportunity to "take it over" and run the show, and I was giving it serious thought. At the time, NYDLA was a 501(c3) Non-Profit and it was on life support. Great idea - terrible leadership.

I owned many "MTP" companies (Medical, Media, Marketing, et.al.) but Maritime was our biggest and most successful. A few years later, Mitch asked me (as the CEO of MTP) to do a keynote at Rutgers, speaking to the students who were graduating from Rutgers with Homeland Security Degrees. Students who were at the time struggling to get jobs in the real world. I knew all about the real world, so I went and I presented. I think it was supposed to be a pep talk, as no one was getting jobs at that time. 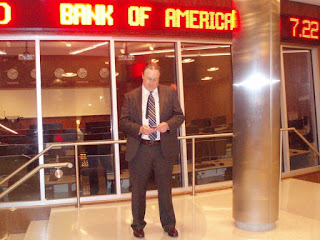 The folks at Rutgers loved my talk so much, that they asked me to make that same presentation to the entire School of Business - that same afternoon!

They said "What you covered just now, is what we want to teach here at Rutgers!" I said sure, I can do a double header. So I hung around for a few hours, and gave my talk again, this time - to all of the Department Heads of the School of Business. They even sent a car for me, they worried I would get lost on campus. They changed their planned meeting agenda to accommodate my talk - my topic. Hmmmm.

That evening (over adult beverages) I told the folks at Rutgers School of Business of my plans of possibly "rebooting" and restarting the currently dormant (and dying) NYDLA. Rutgers offered to be our first Host University. I accepted their sponsorship and their assistance.

I also accepted having direct access to the 500,000+ living alumni of Rutgers. 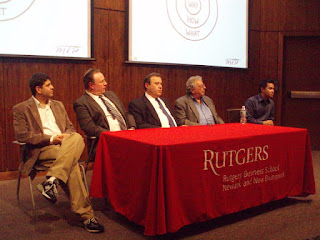 One of the first "cool" things we ever did via the NYDLA was to offer all 500,000+ living alumni access to www.RutgersConferencing.com which was 100% free to anyone with a Rutgers.edu email address. We had ignition, we had lift off. And away we go....... NYDLA was on its way from "can't pay for the damn website" to 5M+ members (and growing).

When other schools saw what we were doing, they wanted in on the action. Our next big home run was Harvard. Then Quinnipiac, UCONN, PURDUE. After that we got all 8 Ivy League Schools to play ball with us.  [ One day I'll blog about www.IvyLeagueCoders.com ]

Bouncing forward to 2019:
Now the only business card I carry is my NYDLA card. Now (today) we have 300+ of the Fortune 1000 and 46% of the Schools of Business (with access to their alumni). We do business with the businesses - who do business with the students - and the graduates of major colleges and universities. Graduates who are now leading and running major corporations. People who are now - our friends.

Mitch Erickson became the Chairman of the NYDLA Leadership Committee. Mega companies like Wells Fargo, First Data, Zoom, et.al. all sponsor us, and they also give NYDLA members "special pricing" as a value-added member benefit.  It has now become "fiscally irresponsible" to NOT be a member of NYDLA.

There are 55M+ people living in "The New York Megalopolis" from Maine to Virginia. I like to say that "people read the New York Times in LA, but no one reads the LA Times in New York".

Tom, how did you go from ZERO to 5 MILLION???
With a little help from my friends.

Read David's book and find out!  If you are not an Amazon Prime member, you can www.JoinNYDLA.org and I'll send you a copy of David's new book for free.

My Friend Bart Oates landed us the NFL Alumni Association.
His brother Barry Oates used to work for me in the 90's
"A friend of a friend" in action for sure.

Posted by Thomas Capone at 10:50 AM No comments:

A little more Sazón in your life 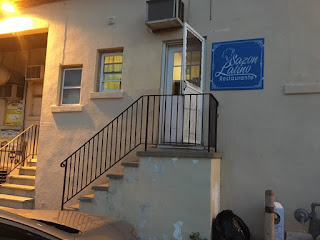 "Sazon" means seasoning in Spanish. Those things that you add to make things just a little bit better. The word refers to things that give more flavor to food, but they are not inherent in the flavor itself.

The Dictionary of the Royal Spanish Academy says that Sazon is "the point of maturity of things, the state of perfection in its line."

On Friday, I needed to meet a friend to chat about business. We rattled off the common "local" haunts - the coffee shop, the pizza place, the other pizza place, and THE OTHER pizza place. Finally he said "I'm picking up dinner from Sazon Latino (Main Street Boonton) to bring home to Kinnelon, why not meet me there. You can eat, and I'll watch you." 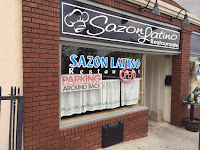 I said sure, and then I thought to myself, "Hmmm.. he is driving almost 10 miles to pick up dinner, 20 miles round trip."

Here is the short version: I felt like I was in "The Soup Nazi" episode of Seinfeld.

I entered through the back door, and there was a line. A nice orderly line of people, all waiting to place their order. Even though there are tables to sit and eat, the majority of the people were obviously doing take out. Lots of them.

I ordered. I sat with my friend, and I ate. He drank Iced Tea, and he watched me eat (again, he was doing take out). And just like Elaine in Seinfield when she tasted the soup for the first time - my knees got weak. Thank goodness I was already sitting. The food was - amazing. The food was "blog worthy." 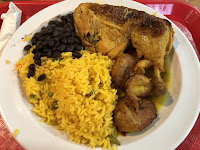 Later that same day, the kids were going to be home from Long Island for a visit. Where oh where could we possibly get take out dinner for the family?

So now, in the period of 24 hours, I have been to Sazon Latino three times. And our family dinner, the casual take out meal at home with the family was outstanding. I told the owner that I would put a positive review for him on Yelp. He said "Wait, wait, let me show you what just came in the mail!" 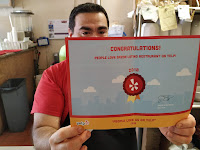 It turns out that he received a certificate in the mail, from Yelp, regarding his amazing number of 5 star reviews in 2018.

And then it hit me. My friend could not wait to tell me about Sazon Latino in Boonton, New Jersey. I am sure he has told everyone in Kinnelon that they should make the round-trip to Main Street Boonton for take out. And then, I was compelled to tell the owner that I would put him on Yelp, foolishly assuming that he did not even know what Yelp was.

And now, Sazon Latino is my muse for this Sunday's blog.

Once again, The Dictionary of the Royal Spanish Academy says that Sazon is "the point of maturity of things, the state of perfection in its line."

I did not realize that I was going to be getting a Master Class in marketing, along with my roasted chicken. The best kind of marketing of all:

Be so good, they can't ignore you. 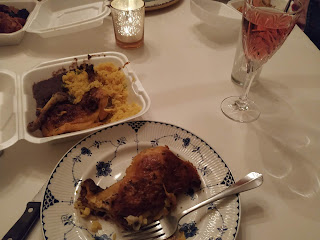 
Posted by Thomas Capone at 8:39 AM No comments: