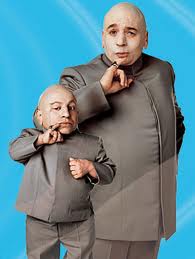 Mini-Me is a character played by Verne Troyer in the second and third Austin Powers movies: Austin Powers: The Spy Who Shagged Me and Austin Powers in Goldmember.
Before Dr. Evil was sent back in time to 1969, his minions made him a clone. The clone was identical in every way but was "one-eighth his size". Upon being introduced to his clone, Dr. Evil immediately declared, "Breathtaking. I shall call him... Mini-Me".
I have two sons that I love very much. Both are in the School of Business at their respective Universities (Quinnipiac and UCONN).  My first son, Tom Jr. was asked when he was around eight years old, “what do you want to be when you grow up?”  His answer was profound: “I don’t know what my dad does, but I want to do that!”
My other son Robert never uttered such an infamous statement, but he is currently Majoring in Entrepreneurship at UCONN.  Go Huskies!
I am bracing myself for my own “Mimi-Me’s” to change their minds (many times) as they seek their passion.  50% of all college students change their majors, change their schools, and/or change their careers.
My father was in the construction game.  We are talking big construction – bridges, roads, skyscrapers. I worked construction when I was young; my summers were spent making around $28 per hour on job sites where (truth be told) I never did any real work. Back then (the late 70’s) $28 per hour for a teenager was “obscene”.  By working with my father each summer, I was able to pay for my own college, and buy anything that I wanted, and still have money left over.  I lived like “Richie Rich” but I did earn it (technically).  Oh, and overtime was double time.  Spoiled, yes. But at least I can openly admit it.
My father wanted me to follow in his footsteps. He wanted me to be in the construction game, and take over the family business. He wanted his “Mini-Me” to carry the torch.
I hated construction.  I wanted to be a Doctor ever since I could remember.  I wanted MD license plates so that I could park at fire hydrants. I wanted a phone in my car like the Doctors on TV, and I wanted “MD” after my name on my Platinum American Express card. And, I wanted a trophy wife, and the big house like all of the Doctors on TV.  As a stupid kid, I had great “passion” for becoming a medical doctor, and I had no (zero) passion for the world of construction.  I’ll take the $28 per hour at seventeen years old, thank you very much. But, if I actually had to do any “real” work, I knew that I would hate hate HATE it.


At that time in my life, I thought that “manual labor” was the President of Mexico.
My father eventually stopped bugging me about going into construction.  At some point, he started taking pride in telling people that I was a Biomedical Engineering Student at Purdue, and going to be a Doctor.  “My son the Doctor” started sounding pretty good to my father, as he would brag to his friends.
I was my father’s only son, and from an old-fashioned Italian family, that is a pretty big deal. I was his “Mini-Me”. I loved my father more than this blog has room for words. He was my Superman. But, there was no way that I was going to follow in his footsteps. I was going to be a Doctor and that was final. We fought over this many times, and I thank my mother for stopping it before it got “physical”.
When I was young, I had no passion for construction – but I had lots of passion for science, technology (cool toys and gadgets) engineering, and for making lots and lots of money. Did I mention the money? In my mind, any career short of being an MD was a waste of life.


Ah yes, to be young and stupid.  Ignorance is bliss.
Fast forward to today: There is no MD on my license plate.  There was no medical school in my bio. While at Purdue, I learned that the love of making money does not a Doctor make.  I found out that I would actually have to interface with “sick people” and I might be asked to touch disgusting things – in order to get “the money”. This was not how they portrayed it on TV when I was growing up. I would have been a terrible Doctor.
My epiphany came when I realized that I had a passion for business – I had a passion for building a business, growing a business, and a passion for making money.  It did not have to be via a career in medicine. I love technology, I love business, and now - I love being in the technology business.


Passion! Do what you love, and the money will follow.
Do what you love, and you will never work a day in your life.
Life is too short, to not do what you love!
Mini-Me is a character that is funny and entertaining, because it is a crazy concept. We are all unique and we are all different. There should be no “Mini-Me” clones, not with Fathers and Sons, and not in business.
I am sending this Father’s Day blog today, as my gift to myself tomorrow will be a day without technology. No computers, no cell phones, nothing that requires keyboards or the Internet. I am spending my day tomorrow with my dog Bella, and (maybe) a golf club or two. There might be some clams and lobsters smothered in steaks on the on the deck, not sure yet. (…my family will see this blog…..hint hint).
I am dedicating this blog to my two “Mini-Me” sons, as I hope they find their passion. They might work with me in our family business one day. And, they might not.  They might go into construction, or they might open a sandwich shop.
At the ripe old age of 50, I now know that the key to a successful life is to find your passion, and then grab on with all of your might.  The rest of it is all minor details along the way.
And a big thanks to my father (who has since passed away) who allowed me to “construct” my own career. Thanks Dad.  And, an “honorable mention” to my mother, who kept my father and I from killing each other while I was on my quest to find my passion.

Epilogue #1:  By the way, I did manage to get the trophy wife, after all.  Thanks, Dianne.
Epilogue #2:  Steak, lobster, clams. That should do it.

Posted by Thomas Capone at 8:16 AM No comments:

“If you keep on doing what you’ve always been doing, you’ll keep on getting what you’ve always been getting.”
How much thought have you actually given to the full power behind that statement and what it might take to change your results. What it takes is a shift in thinking; wiping the slate clean of all your comfortable ways of doing business and stretching your mind to think about new and different ways to build business.
To help you begin the process, here are six significant steps to ponder:

Diversify
It’s comfortable to continue calling on familiar types of customers. But is there an industry that’s not your typical customer base which just might be ripe for using your service? In this fast-changing market new industries are popping up everywhere. Is there something you’ve overlooked? Some category that no one has yet approached? Who might be in need of your service that previously did not? Who that’s already using your service may know a new type of customer, but you haven’t thought to ask?

Leverage your strengths.
What separates you from your competition? Certainly there’s something you have that others don’t. Maybe it’s you and your ability to respond faster, solve problems or just communicate more effectively. Whatever your strength, what are you doing to leverage it?

Build A Network.
The world is a network today. Boundaries are few. The greater your network, the larger your potential for success. What kind of a network have you built?

Take massive action.
Very little happens with any plan, technique or premise until you commit it to massive action. That requires determination and focus. While always important, this is particularly critical during highly competitive and difficult economic times. It requires self-motivation of the highest level and a focus that allows few if any distractions. Do you have what it takes?
I end by sharing with you one of my favorite quotes. You may want to print it out in big, bold, colorful letters and look at it often:
“Choose your distractions wisely for they will cost you dearly.”
Posted by Thomas Capone at 9:47 AM No comments: