Easter eggs, also called Paschal eggs, are decorated eggs that are often given to celebrate Easter or springtime. As such, Easter eggs are common during the Easter season. The oldest tradition is to use dyed and painted chicken eggs, but a modern custom is to substitute chocolate eggs, or plastic eggs filled with confectionery such as chocolate. Although eggs, in general, were a traditional symbol of fertility and rebirth, in Christianity, Easter eggs symbolize the empty tomb of Jesus, from which Christians believe Jesus resurrected. In addition, one ancient tradition was the staining of Easter eggs with the colour red "in memory of the blood of Christ, shed as at that time of his crucifixion." This custom of the Easter egg can be traced to early Christians of Mesopotamia, and from there it spread into Russia and Siberia through the Orthodox Churches, and later into through Europe through the Catholic and Protestant Churches.

A Fabergé egg is one of a limited number of jeweled eggs created by Peter Carl Fabergé and his company between 1885 and 1917. The most famous are those made for the Russian Tsars Alexander III and Nicholas II as Easter gifts for their wives and mothers, often called the 'Imperial' Fabergé eggs. The House of Fabergé made about 50 eggs, of which 43 have survived. Two more were planned for Easter 1918, but were not delivered, due to the Russian Revolution.

The first Fabergé egg was crafted for Tsar Alexander III, who had decided to give his wife, the Empress Maria Fedorovna, the gift of an Easter egg in 1885.

How did we go from the simplicity of 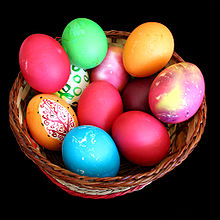 To symbols such as: 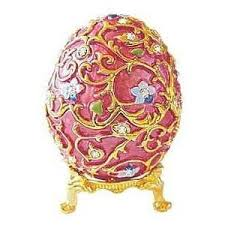 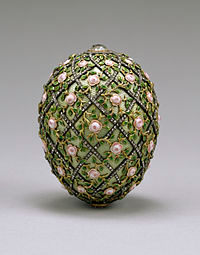 I find it fascinating how the human race can find a way to take one symbol, and convert it into a symbol of something very, very different.

We do this all the time, more than we realize.  We have converted the education system into a hyper competitive, global business. Family farms have been converted into corporate giants driven by insane profits (at the expense of our health). We converted the music, entertainment and sports worlds into billion dollar enterprises. In my own lifetime, we went from “no Super Bowl” to the largest media event in the world.

Name a famously rich person. Did they cure cancer or do something amazing to eliminate suffering in the world? Or did they star in hit action movie, or can they dunk a basketball better than most?

Give us just a few years, and we can take just about any symbol (no matter how pure, no matter how honorable) and tweak it and twist it until it becomes unrecognizable - and - watch it become the opposite of its original purpose.


Can you find the “Hidden Easter Egg” in this blog?

Happy Easter Everyone!
Posted by Thomas Capone at 9:55 AM No comments: