If you are not at least 50 years old or watch old reruns of Hawaii Five-O, the phrase "Book 'em, Danno" might not mean very much to you. This was the catch phrase of McGarrett, the leader of a fictional state police force in Hawaii, in a television show called "Hawaii Five-O."

Generally at the end of most shows, McGarrett would instruct his sidekick, Danny Williams, to take the bad guy into custody by telling him to "Book 'em, Danno." 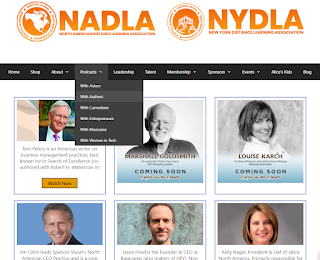 The book 'em derives from the image of a judge sentencing a criminal to every penalty found in the books of law. To charge them with a particular offense; to inflict a severe punishment on them. The "book" is an imaginary book of rules or offenses and their prescribed penalties. The expression dates from the 1930s and is of American origin.

I went down this rabbit hole today, about "Books" because I have been interviewing lots of authors lately. For many years, if you were a published author, that was a big deal. It was a big deal because it was expensive and very difficult to publish, sell and market a new book. If one of the "Big Five" like Penguin/Random House, Hachette, Harper Collins, Simon and Schuster, or Macmillan published your book, that was a very big deal indeed. And you would be right to brag on it.

Today, to achieve "bestseller status" within a single Amazon category rather than overall of Amazon, all you have to do is hit the top of any subcategory for a brief moment in time, and chances are that you'll be awarded the prized orange button with the word "Bestseller", giving you legit bragging rights.

The reason people aspire to call themselves "bestselling author" is because it dramatically increases credibility and personal brand. It can establish someone as a thought leader. But surprise - there is no certain number of sales that it takes to become a best seller. One author I interviewed became a New York Times best-selling author selling just under 3,000 books.

Another author that I interviewed sold 20,000+ in the first week - and didn't make that same list.

The job of an author is a weird one. There is a lot of pressure to do all kinds of things that have nothing to do with writing, or with delivering value to the readers you want to reach. Book launches can do weird things to people. They can cloud judgment. The title "best selling author" does NOT necessarily mean higher speaker fees, more consulting gigs, or more publicity around your brand, as many think it does. You can spend hundreds of thousands of dollars to become a NYT best-seller. The ROI (most of the time) is simply not there.

My wife and I just watched Julia on HBO Max. All about Julia Child's extraordinary life and her long-running television series, "The French Chef," which pioneered the modern cooking show. The HBO series explores a pivotal time in American history - the emergence of public television as a new social institution, feminism and the women's movement, the nature of celebrity and America's cultural evolution.

How many copies of 'Mastering the Art of French Cooking' have sold?

1.5 million copies of the book when it was published in 1961. And now, in 2022, thanks to HBO Max, the sales are growing (again) and the book is (once again) back on the best sellers list. And - the same thing happened once before -  in 2009 - when the movie "Julie and Julia" was a hit, with Meryl Streep playing Julia Child. 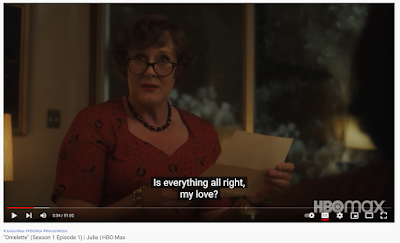 Coffee In The Clouds
Posted by Thomas Capone at 5:20 AM No comments:

Are you sure it was not an Easter Platypus?

Monotremes are mammals that reproduce by laying eggs. Their name comes from Greek and means "single opening," which refers to the fact that they have only one opening for both reproductive and waste removal purposes.

Mammals that lay eggs are found only in Australia and New Guinea.

The history of the Easter Bunny has almost nothing to do with Easter beyond marketing. There aren't any mentions of bunnies, fluffy yellow chicks, baskets of goodies, or chocolate in the Biblical story of Easter, let alone in terms of the resurrection specifically.

According to Time, the concept of the Easter Bunny stems from pagan rituals around the vernal equinox (the first day of spring). The pagan goddess of fertility, Eostre, was also symbolized by a hare and eggs. It is believed that when missionaries spread Christianity throughout Europe, they combined the pagan spring rituals with Easter and resurrection celebrations to make the transition from paganism to Christianity easier for new converts.

In terms of the Easter Bunny's specific ties to the Christian holiday, German writings from the 1600s were reportedly among the first to mention an Easter hare. Called "Oschter Haws" the Easter Bunny was said to have left colorful eggs for good (get it, GOOD children) around Easter. And said GOOD CHILDREN would prepare "nests" for the eggs and leave carrots for the hare. German immigrants are believed to have brought the Easter Bunny tradition to the United States around the 1700s. 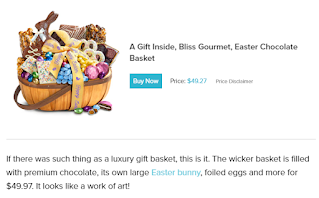 Why is the Easter Bunny a Bunny and not a Chicken? 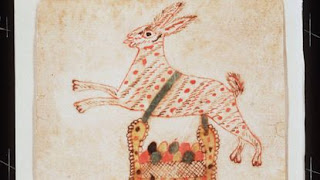 Despite Easter's association with eggs as a symbol of new life and the resurrection, the cute critter symbol of Easter being a bunny and not a chicken (or a Platypus) is no accident. The thinking behind the tradition was simply that rabbits reproduce A LOT, so as a symbol representing new life, rabbits took the edge over chickens. This pen-and-ink sketch is the earliest known American picture of The Easter Bunny, dated to around 1810, from Schuylkill County, Pennsylvania.

Easter 2022 is projected to be sweeter than Easter 2021. The National Confectioners Association (NCA) predicts that candy and confections sales for this year's Easter season will be 5% to 7% higher than last year, when sales topped $4 billion.

More than 77% of people say they will absolutely or probably buy Easter candy this year. Easter beats Halloween. The Cadbury Easter Creme Egg is the most popular Easter Candy in 24 states, closely followed by Reese's Peanut Butter Eggs in 20 states. Egg-shaped chocolates are the top candy in 88% of the USA.

AND SO... The Easter Bunny got its start in the 18th century with German Lutherans who settled in Pennsylvania. "Oschter Haws" laid the eggs. Good children would get decorated eggs and other treats. Naughty children who did not behave would find rabbit pellets in their nests.

I am happy to report that the Easter Bunny (not Platypus) made it to BOONTON USA this morning. Thankfully, nice little chocolate eggs. No rabbit pellets. 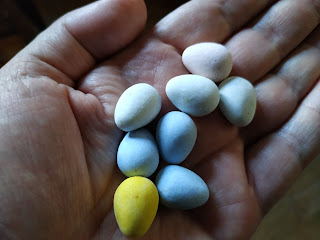 Did the Easter Bunny Jump the Shark?

Today is Palm Sunday. This morning, I received a reminder about Easter in my inbox. Along with 101 Happy Easter messages that I might send out as a small business. 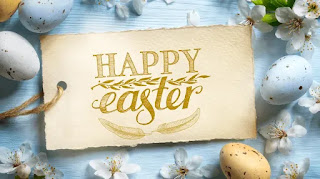 I was reminded of THE IMPORTANCE of sending out a Happy Easter Message.

I was given a list of THE BEST Easter Greeting messages to send to employees. 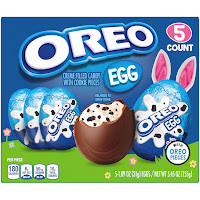 And if I was uncomfortable sending a religious Easter message in a professional environment, I was given a list of Easter Greeting messages that don't focus on faith, Jesus, or Christianity. I was reminded that I can send funny Easter messages, or ones that reference springtime or the Easter Bunny.

And, if I had a boss, I was given a list of possible well wishes and ways to show my appreciation to my boss.

I was reminded that Easter offers the opportunity to share goodwill and gratitude with friends and family or colleagues and clients. That while Easter is a sacred religious festival for Christians, people of many faiths embrace the ancient celebration that welcomes spring. And I was reminded that if I was looking to engage colleagues and clients with a secular message or a religious one, there are Easter greetings to meet any criteria. 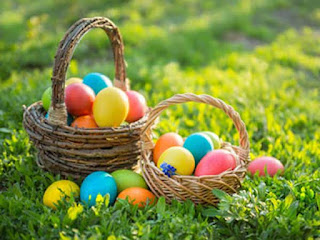 Once again, THE IMPORTANCE of sending a Happy Easter message was made clear. That for Christians around the world, Easter celebrates the resurrection of their Lord and Savior, Jesus Christ. For many others, Easter commemorates the arrival of Spring and the renewal of life. Either way, sending Easter wishes messaging shows professional contacts, including co-workers, clients, and even management, that you recognize their faith and appreciate their role in your life.

Easter spending in 2022 is anticipated to be the highest on record. Last year, consumers spent an average of $179.70 with nearly 79% of Americans celebrating the holiday (spending money) in some capacity.

Personally, I have not been to a Catholic Easter Mass in many (many) years, but I do remember this:

"We are an Easter People". 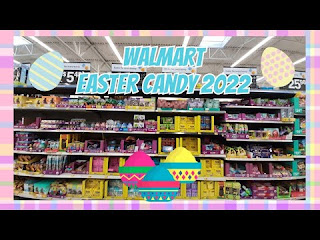 Posted by Thomas Capone at 6:02 AM No comments: 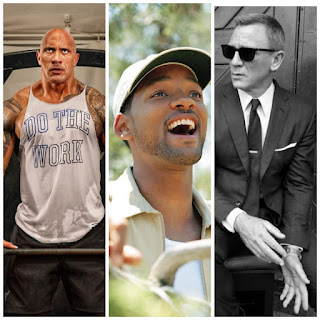 Success! The state or condition of meeting a defined range of expectations. It may be viewed as the opposite of failure. Ah, but the criteria for success depends on the context, and may be relative to a particular observer or belief system.

Achievement, accomplishment, triumph, victory, win, glory. These are all good synonyms for success.

Is Tom Brady successful? How about Will Smith? Did the retire / unretire move of Tom Brady tarnish his career? Will Smith just won an Oscar for Best Actor, something that he came close to winning in the past. Is he? The best actor? Based on what criteria?

What makes a business successful? Is it their balance sheet? Their stock price? I am old enough to remember when GE was considered the most successful company in the world. Today, not so much.

The 2022 Oscars drew 16.6 million viewers last Sunday, up 58% from last year's record low audience of 10.5 million. Despite the year-to-year improvements, Sunday's Oscars will go down as the second-least-watched since Nielsen began tracking total viewers in the mid-1970s. Prior to last year, the audience had never fallen below 20 million viewers. 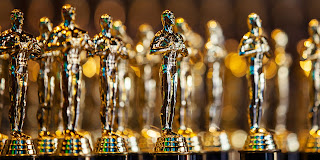 The Oscars made me think about Business Success. The financial rewards that come from being successful in business are of course important to many entrepreneurs, and are key factors in motivating people to work hard and take tremendous risks. But if success can be defined as the feelings of satisfaction and completion one has when a business career is over, success has other dimensions that for many business owners are as significant, or more so, than monetary rewards.

The Top 10 Highest Paid Actors in the world as of 2022 are: Daniel Craig, Dwayne Johnson, Will Smith, Denzel Washington, Leonardo DiCaprio, Mark Wahlberg, Ryan Gosling, Chris Hemsworth, Brad Pitt, and Michael B. Jordan. No women in the top 10 ten.

Dwayne Johnson, Dwayne "The Rock" Johnson is the top-earning actor on Forbes' list of highest-paid entertainers in 2022, with an estimated annual salary of $270 million. Never say never, but I don't see "The Rock" winning an Oscar any time soon. And now that I said that, he probably will.

They say that "Beauty is in the Eye of the Beholder" which says that different people have different ideas about what is beautiful.

I'm pretty sure the same is true about success. 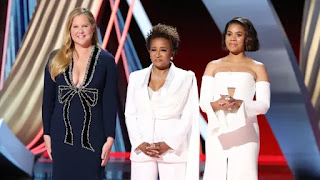 Posted by Thomas Capone at 8:18 AM No comments: