These ARE the Droids you're looking for

The latest Star Wars movie is out. I cannot believe that I was 17 years old when the original Star Wars movie (Episode IV) was first released in 1977. A droid is a fictional robot possessing some degree of artificial intelligence. The word "droid" has been a registered trademark of Lucasfilm Ltd. since 1977.

There were many droids working the crowds last night in Bryant Park.

In 2001, Bryant Park Corporation envisioned offering free Internet access in the park, but was not sure how to build such a network. In the summer of 2002, the Bryant Park Free Wireless Network launched with three access points covering the park and allowing users to access the Internet as long as their batteries will allow.

Since that time, the network has upgraded with 12 new access points, making Bryant Park one of the busiest hot spots in the world. 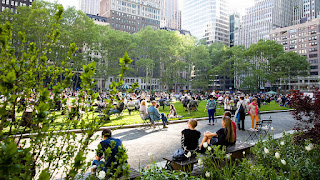 From potter's field to reservoir to one of the world's busiest public spaces, Bryant Park has a rich and storied history. Security issues aside, I have logged into the Bryant Park Free Wireless Network a few times in the past year. And because of this, "the droids" knew I was in the park last night.

As soon as I entered the park, my smartphone knew that I was back. I received an email, with a coupon for free Hot Chocolate.
And so it begins. 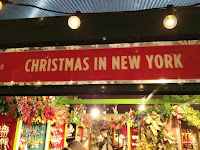 There were over 175 boutiques offering exquisite gifts, distinctive apparel, and local foods. What I found amazing is that collecting people's data (names, emails, etc.) was just as important as making a sale - maybe more important. iPad powered kiosks would make the sale - and free shipping made it unnecessary to carry packages in the park. The "pop up" kiosks would make the sale, without the need to carry inventory. I think this is the future of retail. No inventory, experience the product, and then everything is shipped to the home or office. 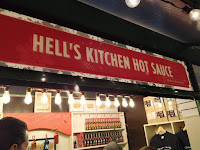 I did a test. I bought some New York Hot Sauce paying cash, with a 20% instant coupon for signing up for their email newsletter. I used the fake (but working) email Bryant.Parker@NYDLA.net just to see what would happen. Well, it looks like as of this morning, Time Magazine would like to offer Mr. Bryant Parker a free subscription. And it looks like Bank of America would really like to meet Mr. Bryant Parker. And many others seem to be very keen to connect and engage with Mr. Bryant Parker, who has a true DOB of 12/28/19. 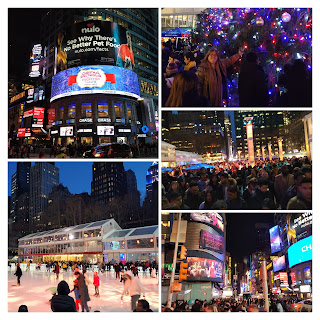 I am fine with getting this form of marketing solicitation, since I did give my permission to contact me as soon as I logged into the park's free WiFi this past summer. But it will be very interesting to see who next wants to meet Mr. Bryant Parker.

I am a big fan of the Bryant Park Corporation (BPC) which is a not-for-profit, private management company. It is a popular, year-round New York City destination with lush seasonal gardens and a multitude of free activities. Around 12 million people frequent Bryant Park each year - and they (like me) log into the Bryant Park free WiFi.

And this is why Mr. Bryant Parker can now expect marketing emails from Netflix, Bank of America, The New York Times, Lululemon, Southwest Airlines, Citibank, HBO, Old Navy, Evian, Clearchannel, the Wall Street Journal, and many more. These brands comprise Bryant Park's Premier Partnership program, and are recognized as the park's most valued corporate partners.

Like I said, I'm cool with this deal. Keep the park clean and safe for ALL 12 million of us all year long, and your droids can market to me (us). 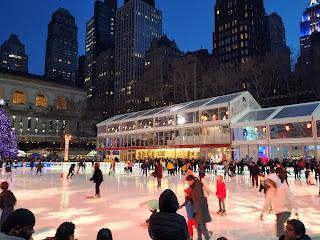 
Posted by Thomas Capone at 7:48 AM No comments:

Do you know what this is?  A better question to ask would be have you ever USED one of these?

This past week, members of NYDLA gathered to attend the AI Summit in NYC. If you Google "What is Artificial Intelligence" you will get a good idea of how AI is transforming the world. Manufacturing, retailing, transportation, finance, healthcare, law, insurance, education - pretty much every industry. 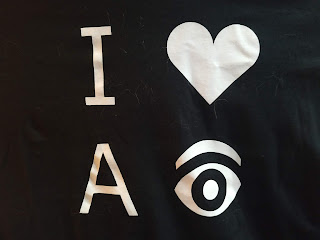 So many NYDLA vendors and sponsors had amazing booths at the AI Summit at Javits Center. Microsoft, Facebook, Amazon, Google, Accenture. IBM Watson was giving out T-Shirts which at first glance made me pause (be it only for a second) as my OK Boomer brain saw "iHeart a Rotary Telephone"

Everything we love about civilization is a product of intelligence.

If you Google "telephone" you will see images like this: 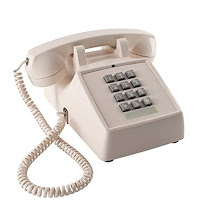 But if you Google just "phone" you will see images like this:

As I spent two days at the AI Summit, I could not believe what I was seeing and hearing. It hit me pretty quickly that what's happening in the world of AI is not just an important topic, but by far THE most important topic for our future. 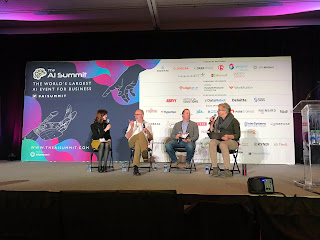 So, the world's $1000 computers today are smarter than a mouse brain, which is about a thousandth of human level. But we were at about a trillionth of human level in 1985, a billionth in 1995 and a millionth in 2005. So based on Moore's Law, we shall have an affordable computer by 2025 that rivals the power of the human brain. That's five years from now.

Let's talk about something different - but not different at all. 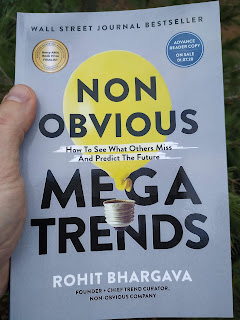 A few days before the AI Summit, I received an advance reading copy (galley) of Rohit Bhargava's new book. For the past ten years, his signature annual Non-Obvious Trend Report has helped over a million readers discover more than 100 trends changing our culture. Rohit and his team of trend curators take an expansive look at the research to reveal "Megatrends" that are transforming how we work, play and live.

And the mission of "NYED-LA" is living, learning, working, playing - in the clouds. Rohit Bhargava has agreed to do a video podcast with me - which shall reach millions of people around the world via the Workplace by Facebook platform.

NYDLA.net (dot net) is powered by Workplace, which empowers us to engage with millions of members in every time zone. Just a few years ago, this would have been impossible. Today, it is not only easy to reach a global audience - it is expected. 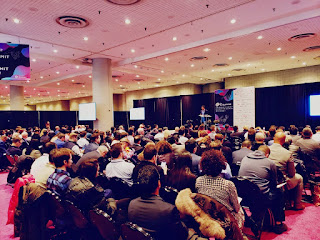 There is a cool video on Amazon and Netflix right now, about the 1964 New York World's Fair (I went, I was four). Or, you can watch clips on YouTube for free. Some of these visions of the future came true - others not so much. But the Law of Accelerating Returns seems to be on full display.

The kind of superintelligence we're talking about today is something beyond normal imagination. We are living in an intelligence explosion - where the smarter a machine gets, the quicker it's able to increase its own intelligence, until it begins to soar upwards, getting exponentially smarter.

In my lifetime, certainly in my children's lifetime, we shall be facing the reality of coexisting on the Earth with something (a machine) that is as intelligent as your Uncle Harry (or maybe a million times smarter) than your Uncle Harry.

And definitely smarter than the average 17 year old, right?


Posted by Thomas Capone at 7:40 AM No comments:

No deals without the feels

As of this post, the E.T. and Elliot Holiday Reunion Short has been watched 10M+ times on YouTube. This number is certain to go up over the rest of the month. My prediction, it will hit 100M+ views before January.

Released on June 11, 1982, E.T. was an immediate blockbuster, surpassing Star Wars to become the highest-grossing film of all time - a record it held for eleven years until Jurassic Park, another Spielberg film surpassed it in 1993.

The Comcast Xfinity commercial (short film) is a great example of the emotions of sales. How feelings drive purchases. How the way that we "feel about the deal" is at the core of every transaction, consumer or commercial.

https://www.xfinity.com/et might have "Won the Internet" for the holiday shopping season 2019. 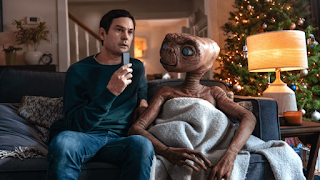 And tomorrow is Cyber Monday, setting the stage for an Amazon / Walmart / Best Buy / Costco / Target attempt to break the Internet.

Beyond the holiday giving spirit, there are deeper psychological reasons for spending massively.

Everyone loves a deal. When we buy something at a price that's lower than what you are willing to pay, or lower than the expected price - this is very satisfying. Even when we don't need what is on sale, the value of the deal itself triggers dopamine in our brains. In reality, sales happen all year long and prices fluctuate.

FOMO or "fear of missing out" drives people to purchase things they otherwise would not purchase. Consumers tend to give in and make a spontaneous purchase because it feels like a gamble to try to find a better deal elsewhere.

And then there is something called Shopping Momentum. Once you buy one thing, there is a psychological impulse to purchase a second, unrelated product. So, shopping creates more shopping. This is why door-buster deals can have loss leader items to bait you to making a first purchase. ANY purchase will do. You might shop and buy a smart TV at an amazing price, but once you make THAT purchase you then buy other items that are not deeply discounted. 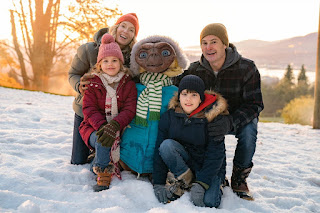 So back to E.T.'s return journey to Earth for the holiday season. It focuses on the importance of bringing the family together. Henry Thomas reprises his role as Elliot, now a father, reuniting with the alien. Cute little E.T. has hacked into your brain's happy chemicals: dopamine, serotonin, endorphins and oxytocin.

Understanding a prospective client's buying motives are much more powerful than possessing selling skills or deploying sales tricks and techniques.

People buy things for emotional reasons, and then they will use logic to justify and defend their purchases.

OK, class is in session. Watch the video below, and then focus on how you feel. If you are already an Xfinity customer, you are going feel BETTER about yourself. You might not leave Xfinity if you were thinking about switching to a competitor. If you are on the fence, you might become a NEW Xfinity customer, based on your positive emotions.

But simply watching this video will get you into the holiday spirit, and it will help you to justify any and all of your 2019 holiday purchases.


Posted by Thomas Capone at 7:48 AM No comments: