Yogi Berra was one of the great ballplayers, but he also spent years as a successful team manager. Yogi will also go down in history for his odd comments. He once picked up a pizza. The server asked if he wanted the pizza sliced into six or eight pieces. Yogi replied, “Better make it six, I’m not that hungry.” Yogi’s wisdom applies to business:


“If you don’t know where you’re going, you wind up someplace else.”
Make a plan. If you don't have a clear direction, you will drift. A plan may or may not keep you on track. But if you have a plan, you’ll know when you’re off track. Then you can make adjustments before it’s too late.

“When you come to a fork in the road, take it.”
From a management point of view, it means that a clear decision is better than no decision. So when you come to a place where you need to make a decision, don’t hesitate. He who hesitates is lost.

“You can observe a lot by watching.”
What does Yogi mean? You need to study the environment you're managing. Pay attention. Watch. Listen. Get feedback. Business owners stumble when they make assumptions.

“It ain't over till it’s over.”
Yogi spent his career in a game that does not depend on time. The game is over only when the last play had been played. Until then, anything can happen. In business, as long as you haven't given up, you have a chance to make it. No matter how difficult your road, you're not out until you are called OUT!

“The future ain't what it used to be.”
Our feelings and our ideas about the future changes. Assumptions change, possibilities change. The more you can imagine, the bigger your potential future. A future with greater challenges and accomplishments.

That last Yogi quote struck a nerve with me.

On the day after Labor Day 2015 we officially launch our first (of many???) coworking spaces in Morris County, New Jersey: www.BoontonWorks.com

We are only a few miles from the Yogi Berra Museum and Learning Center in Little Falls, New Jersey. Coincidence? No, because at BoontonWorks.com “We’re open ‘til we close.”

Thanks, Yogi. I could not have said it better myself.


Yogi got his nickname, because he would sit on the ground
with his legs crossed just like a "Yogi".
Posted by Thomas Capone at 7:31 AM No comments:

A bad day of golf 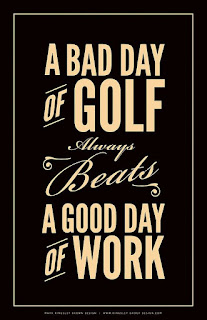 Yesterday I "cashed in" my Father’s Day Gift from my son, Tommy. I used to love playing golf, twice a week (Wednesdays and Saturdays, like clockwork). I used to say that if I could not “be” a doctor, at least I can live like one! The best round of golf in my life was a 78 on a Pete Dye course. I was in the zone that day.

Yesterday was not that day.

After a three year break from the game of golf, yesterday was my first time on the links. The weather was perfect, the course was not crowded. As we pulled into the parking lot, the first thing that hit me was “why is no one here?” The weather is PERFECT for golf, and it is the weekend. This cannot be good. Is there something wrong with the course?

There was nothing wrong with the course. It was perfect.  So, what’s up with the un-crowded course? Ah, a sign of things to come. Perfect things.

We needed to get some food, and planned on eating at the course before playing golf. The restaurant on the course grounds was closed, with a “For Rent” sign in the window. That was it, just a little sign, everything was shuttered. First thing that came to mind as a businessman and entrepreneur was “well, if they could not make it here, why would I want to rent such a loser of a location?”

Why not have a sign in the window that says “Retired and moved to Florida! Life is Good! Call 555-444-1212 to rent this wonderful space!”

There was a girl selling hot dogs and drinks from a table. But she was taking “cash only” and was not prepared for making change of large bills.

Why not have Square or PayPal to swipe cards? This is a golf course, 99.999% of the people are going to have a credit card / debit card. Can you really afford (in this day and age) to NOT accept plastic, no matter WHERE you are - even on a golf course? We are in the age of the smartphone, Apple Pay and eCommerce everywhere. And it is so easy to add an extra 20% (or more) tip when you are showing off in front of your golf buddies, right? But, I bit my lip and did not lecture the poor kid on her missed opportunity.

Golf is an amazing game. My best memories are of spending Sunday afternoons playing golf with my father and his brother (my Uncle Tom Capone) in Saddle River, New Jersey. We had a standing tee time every Sunday at 1pm. The starter would call out in a booming voice on the PA system: “Capone, Capone, Capone…...and someone else..... to the first tee." I remember those days like they were yesterday. I would observe the dynamics of my father with his brother, the dynamics of my father with the golf pros, the dynamics of other golfers, everything. I think it was here that I first knew that I would one day become a salesman. Or a psychologist. Or both.

"You can observe a lot by just watching." - Yogi Berra

Do they lose their temper easily? Do they find a way to enjoy themselves, even when losing a ball (or two, or three) into the water hazard? Can they recover from a bad shot? Do they give themselves the short putts, or do they take the game seriously?

So, I cannot shut down my brain, even on the golf course. Your brain does not take a day off, ever. And I think that is a good thing.

Yesterday I observed what an amazing young man my son has become. He is playing the game of golf - and the game of life - by the rules. There is another saying that goes: “Show me your friends, and I’ll show you who you are”. Yesterday we played with one of Tommy’s friends from High School. I would adopt that kid in a New York minute.

Did I mention that I beat both of these kids, even after my three year hiatus from the game? Of course I did not mention that - if I was bragging how my 54 year old former athletic body beat both of these kids in their 20’s, it would not be something that I would want the world to observe, right? So, let’s not bring it up again, this topic of me beating the both of them yesterday - after three years of not touching a club. Move on people, please!

Who is Pete Dye?

Well, my observation would be this: if you really wanted to know, you would have Googled him by now.

Lawrence Peter "Yogi" Berra (born May 12, 1925) is a retired American Major League Baseball (MLB) catcher, manager, and coach. He played almost his entire 19-year baseball career (1946–65) for the New York Yankees. He is widely regarded as one of the best catchers in baseball history. He was elected to the Baseball Hall of Fame in 1972.

Berra was an All-Star for 15 seasons. He is one of only four players to be named the Most Valuable Player of the American League three times and is one of seven managers to lead both American and National League teams to the World Series. As a player, coach, or manager, Berra appeared in 21 World Series including 13 World Series championships. He was named to the Major League Baseball All-Century Team in a voting of fans in 1999.

Berra, who quit school after the eighth grade, was also known for his pithy and paradoxical quotes, such as "It ain't over 'til it's over", while speaking to reporters. Simultaneously denying and confirming his reputation, Berra once stated, "I really didn't say everything I said.

On a fine summer day way back in the 70’s the starter at Saddle River Country Club called out on the PA system: “Capone, Capone, Capone and Berra.”  True story. Thanks Dad.

Who is Thomas Anthony Capone?

Well, my many years of making keen Sherlock Holmes observations of people and their behaviors tells me this: My son is my life coach. He constantly reminds me that you can learn a lot by just watching.

In baseball, you can pitch a perfect game. But there is no such thing as a “perfect round of golf”.

Not true. We just had one yesterday.

We need to keep that score card and frame it. 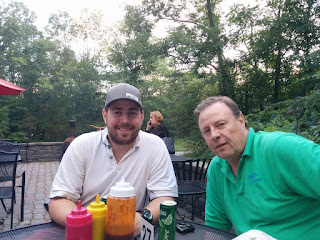 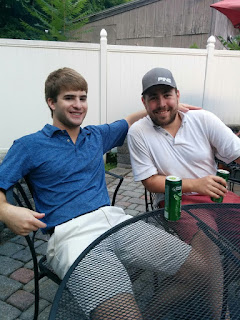 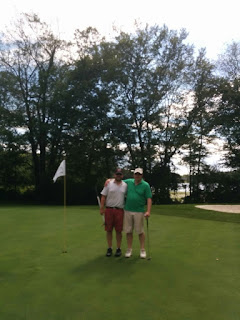 Posted by Thomas Capone at 6:54 AM No comments: