As with most other military forces the Roman Military adopted an extensive list of decorations and financial rewards for military gallantry - and likewise a range of punishments for military transgressions.
When the Roman Soldier chose to become enrolled in service to the state, he swore a military oath known as the sacramentum: originally to the Senate and to the Roman People, and then later to the general and the emperor. The sacramentum stated that he would fulfill his conditions of service "on pain of punishment" up to and inclusive of death. Discipline in the Roman Army was extremely rigorous by modern standards, and the general had the power to summarily execute any soldier under his command.


Kinda brings new meaning to the phrase “my boss is a jerk”.
The imposition of cruel and unusual penalties to maintain discipline among the chaotic conditions of the north European provinces in the mid-third century was deemed to be a necessity for the maintenance of effective command in the Roman Military.
Landing a job in the Roman Military was considered to be a fantastic career in the day; paying well and providing a life full of adventure, and admiration from your friends and family.  But, if you did not follow the instructions (the rules) from your boss (and follow them to the letter) you could be put to death by the fixing of your hands and feet to a cross.
Getting a High School degree in today’s world has become a suggestion, not a rule.  Going to college and graduating has now become a suggestion (a very good one) but not a rule. Working hard, showing up on time, and following the policies and procedures of the company that you work for and listening to the boss that pays your salary has somehow become “optional” but no longer a rule.
Today’s business world is full of suggestions, recommendations and rules, but the consequences or “punishments” for not following these clearly established rules and instructions rarely seem to “fit the crime”.
At its height, Rome was the foremost global power.  It accomplished this without the Internet, without radios and without emails, tweets, texts, fax machines, or FedEx®. But the Roman Empire did have one thing – it had rules.


A Commander’s written orders could leave Rome and be hand-delivered to a Roman Soldier via courier anywhere in the world – and the instructions would simply be followed, period.  No need for follow up meetings or conference calls.  Everyone simply knew how things worked, and the “staff” were all very “highly motivated” to produce the required results.
I think that the death penalty is a little harsh for leaving the coffee pot on when you leave the office for the weekend (even though we are now on our fifth coffee pot). Or when someone simply refuses to follow the written policies, procedures or instructions of the corporation.  And when people simply refuse to follow the rules designed to make the company that they work for (...or make the country they live in...) fiscally sound, well that's just nuts!
It really is amazing how the global success of the Roman Empire was accomplished without the magical business tools that we all seem to take for granted. No Facebook®, no LinkedIn®, and no Twitter®. And yet, things simply got done “on time and on budget”. What they lacked in technology, the Romans made up for by creating clearly defined and enforceable laws - they had rules.
Yes, the world that we live in is indeed full of Suggestions, Recommendations and Rules.
Hail Caesar 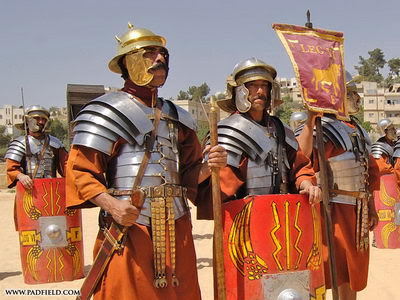 Posted by Thomas Capone at 7:34 AM No comments:

Baseball Hall of Fame Yogi Berra's second claim to fame is for being one of the most quoted figures in the sports world. He is credited with coining the deceptively simplistic observation, "It ain't over till it's over." But he's also known for his flubs. "This is like deja vu all over again."  "When you come to a fork in the road, take it.”
I had the pleasure of speaking to a group of MIS and IT students at a major University this month.  And, I was able to “observe a lot by watching”.
By default, those who attended this student organized event are predisposed to success. Simply by attending the lecture, these young men and women demonstrated a proactive, energetic “make your own luck” attitude that (in my humble opinion) will guarantee their success in the world of business. They could have spent their lunch hour anywhere on campus, hanging out with their friends.  But they put my presentation on their calendar; they made the time to listen to someone from the world of business, to gleam any nuggets of wisdom, to pick up any possible advice, and to add that knowledge to their already diverse (and very expensive) education.
We certainly live in amazing times. Students have access to more knowledge, and can tap into more real-time information online, than ever before.  Just how much information are we trying to absorb? At the 2010 Techonomy conference in Lake Tahoe, California, Google's CEO Eric Schmidt stated that every two days people create as much information as they did from the dawn of civilization to 2003, about five exabytes of data.


We are living in the age of Google, YouTube, Distance Learning, and the iPad.  In 2010 The University of Phoenix invested over $1B (that's billion) in perfecting online education.  This year, it shall be $2B.  Students can view lectures and riveting talks by remarkable people for free on www.TED.com in High Definition from anywhere in the world.

There are some things in this world that you cannot teach.  Passion is one. Creativity is another. I am blessed to have found a career path that allows me to live my passion for technology every single day. And I learn something new every day. I see more opportunity in the world of business today, than when I was in college.


Oh, how I wish I could trade places with these students, and have access to the tools and distance learning technologies that they have at their fingertips.
Yogi said "Baseball is 90% mental -- the other half is physical." I think we can say the same thing about education.  Those who want to learn will learn.  Those who hope to get an education and pursue a career in their dedicated fields of study – they will find a way.  The future is brighter than ever, but only for those who are serious and honest with themselves. Passion cannot be found online or in the campus library – a successful career will always be found from within.

By the way, for those of you who caught the “Yogi Bear” error in the title of this blog: “I made a wrong mistake” but "I didn't really say everything I said."