Life, Liberty and the pursuit of Appiness

Sometimes I throw around the latest tech words assuming others know what I am talking about because I spend so much time with technology and the words are common to me. But the general population may still consider words such as “app” to be mysterious.

An app typically refers to software used on a smartphone or mobile device such as the Android, iPhone or iPad, as in “mobile app” or “iphone app.” But the  phrase “Web app” or “online app” is also used in a business setting as an abbreviation for “Web application” or “online application” meaning software that you access and use while online, via a browser, instead of software residing on your computer.

For small-business purposes, we don’t need to get complicated. For most of us, it’s sufficient to think of an app this way:  an app is a software program that you use online or on mobile devices.

Why should we all care more than we do about apps?”

Web apps or online apps can be a faster, cheaper, more efficient way of deploying software in your business.  Rather than buying a software license, having to install it on your servers or local computers, keeping up with updates you can simply go online and sign up for an account.

Mobile apps extend the reach and productivity of your business.  Once you equip your mobile device and/or your employees’ mobile devices with apps, then you and they can perform all sorts of business functions while out of the office traveling, on sales calls, making service calls, etc.  A mobile app usually enables you to do something specific, like accessing your bank account in the case of a banking app, or run payroll with a payroll mobile app.

I’m attending the www.CollisionConf.com in New Orleans this week with my son, and they have a very cool app. It is a tech conference, so this is not a shocker. What IS somewhat of a shocker is that to attend the conference you MUST download the app to your mobile device.  It is mandatory. No appy, no happy.


The world is about to become a very appy place. You must use these apps, or you must shop (go, visit, play) somewhere else. And that is something to think about.

I use E-Z Pass in my car, and I love it.  It saves me time and money - but it is still my choice. I could still pay cash at bridges and tunnels, but I choose to be automated.  The world of app development is becoming less about choice, and more about what is good for the supplier or the vendor.

Apps are very cool indeed, until they are no longer cool. Paper money is on its way out, but not yet. Debit cards and paying with my smartphone is cool, but I think the “cool” will go away if I am no longer allowed to decide for myself.

"Life, Liberty and the pursuit of Happiness" is a well-known phrase in the United States Declaration of Independence. The phrase gives three examples of the "unalienable rights" which the Declaration says has been given to all human beings by their Creator, and for which governments are created to protect.


Happiness (appy-ness) should be pursued, not forced upon us, right? So, if you "choose" to click on www.TomCapone.com you will find me on one of my most favorite apps. Or not, up to you.

Posted by Thomas Capone at 9:48 AM No comments: 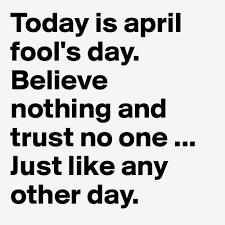 “In the valley of the blind, the one-eyed man is king.”
April Fools' Day is celebrated every year on the 1st of April by playing practical jokes and spreading hoaxes. The jokes and their victims are called April fools. People playing April Fool jokes expose their prank by shouting April Fool. Some newspapers, magazines, and other published media report fake stories, which are usually explained the next day or below the news section in small letters. Although popular since the 19th century, the day is not a public holiday in any country.

Last Friday was April Fools' Day. Did you get fooled?  Did anything that you read, observed or were told…… fool you?

If you are reading this, you have access to the Internet. You can Google things. You can check things out on www.Snopes.com.  You can check just about anything on any topic from your computer, your smartphone, your tablet, in a matter of seconds.

Practical jokes differ from confidence tricks or hoaxes in that the victim finds out, or is let in on the joke, rather than being talked into handing over money or other valuables. Practical jokes are generally light hearted and without lasting impact; their purpose is to make the victim feel humbled or foolish, but not victimized or humiliated. However, practical jokes performed with cruelty can constitute bullying, whose intent is to harass or exclude rather than reinforce social bonds through ritual humbling.

When I was growing up we had ONE DAY…….one dedicated day……… April 1st was the one (and only) day to get this all out of our systems. One single day.  April 1st was the day, to get all the jokes, all the pranks, all the foolishness out into the world. You would be on your guard all day long - the 24 hours of April 1st was a day to open doors slowly, a day to be weary of friends bearing gifts, and a day to use caution when taking phone calls from strangers.

Somehow, the Internet in all of its magic and power, has made every day April Fools' day. 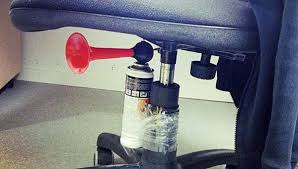 Posted by Thomas Capone at 8:10 AM No comments: