That's news to me 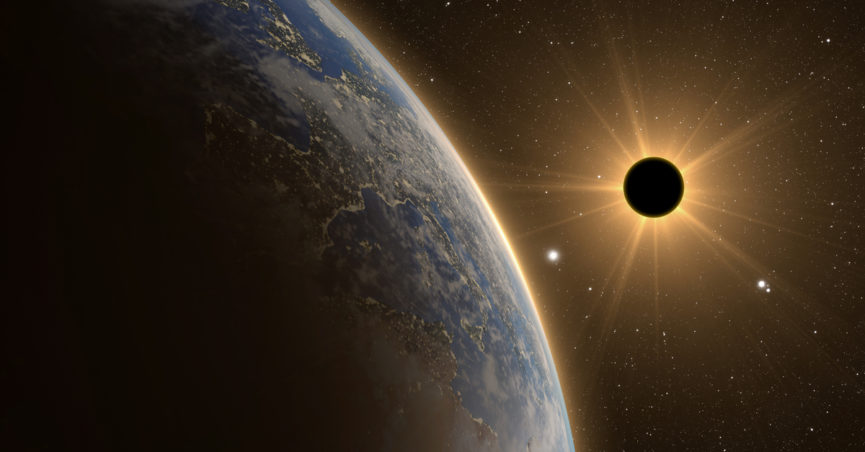 HOUSTON, TX — After double-checking their math, scientists have announced that the total lunar eclipse predicted for August 21, 2017, will occur August 3, 2018.
“Due to a computational mishap, the eclipse we projected for later this month will actually take place late next year,” stated NASA astrophysicist Dr. Theodore Moneta at a hastily-planned press conference from Johnson Space Center in Houston. “We were a bit off.”
Dr. Moneta explained that in calculating the date of the eclipse, scientists utilized a complex formula involving geocentric ephemeris for the Sun and Moon, various parameters, constants, and the Besselian elements, but along the way an error went unnoticed.
“In layman’s terms, we forgot to carry the one,” explained Moneta, a mistake that has plagued 12-year-olds in 7th grade math for centuries.
“It’s disappointing,” stated Matt Mead, governor of Wyoming, upon hearing the news. “Obviously, the NASA nerds really dropped the ball on this one.”
[ The above, is what is known as “Fake News” ]

Fake news is a type of yellow journalism or propaganda that consists of deliberate misinformation or hoaxes spread via traditional print and broadcast news media or online social media. Fake news is written and published with the intent to mislead in order to gain financially or politically, often with sensationalist, exaggerated, or patently false headlines that grab attention. Intentionally misleading and deceptive fake news is different from obvious satire or parody which is intended to humor rather than mislead its audience. Fake news often employs eye-catching headlines or entirely fabricated news stories to increase readership, online sharing and Internet click revenue. In the latter case, it is similar to sensational online "clickbait" headlines and relies on advertising revenue generated from this activity, regardless of the veracity of the published stories. Fake news also undermines serious media coverage and makes it more difficult for journalists to cover significant news stories.

In the 1200s BC, Rameses the Great spread lies and propaganda portraying the Battle of Kadesh as a stunning victory for the Egyptians; he depicted scenes of him smiting his foes during the battle on the walls of nearly all his temples. The treaty between the Egyptians and the Hittites, however, reveals that the battle was actually a stalemate.
During the first century BC, Octavian ran a campaign of misinformation against his rival Mark Antony, portraying him as a drunkard and a womanizer and a mere puppet of the Egyptian queen Cleopatra VII. He published a document purporting to be Marc Antony's will, which claimed that Marc Antony, upon his death, wished to be entombed in the mausoleum of the Ptolemaic pharaohs. Although the document may have been forged, it invoked outrage from the Roman populace. Marc Antony ultimately killed himself after his defeat in the Battle of Actium upon hearing false rumors propagated by Cleopatra herself claiming that she had committed suicide.
During the second and third centuries AD, false rumors were spread about Christians claiming that they engaged in ritual cannibalism and incest. In the late third century AD, the Christian apologist Lactantius invented and exaggerated stories about pagans engaging in acts of immorality and cruelty, while the anti-Christian writer Porphyry invented similar stories about Christians.

*****
I just made this all up.
Or did I? Or, did I simply “cut and paste” these accounts of history from the Internet, from a website that someone else “cut and pasted” from another website?
The International Federation of Library Associations and Institutions (IFLA) published a summary in diagram form to assist people to recognize fake news. Its main points are: 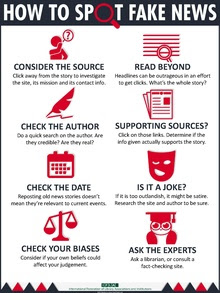 So, unless you were there and unless you saw it with your own eyes, then it is all fake news, right?

Google: Why Science Tells Us Not to Rely on Eyewitness Accounts

All news is fake, just as all eyewitness testimony is fake. All history books are fake, because the author was not there. What you read on Wikipedia today, can be edited and updated tomorrow.


So before we act (or react) based on ANYTHING that we read or hear, remember this: all news is fake, to some degree. 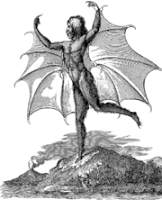 One of the earliest instances of fake news was the Great Moon Hoax of 1835. The New York Sun published articles about a real-life astronomer and a made-up colleague who, according to the hoax, had observed bizarre life on the moon. The fictionalized articles successfully attracted thousands of new subscribers, and the paper suffered very little backlash after it had been disclosed as a hoax.