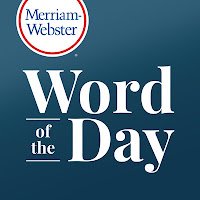 Annus mirabilis means "a remarkable or notable year." The first known use of annus mirabilis was in 1667. The British poet John Dryden said that the "year of wonders" was 1666. That was the year of a great British naval victory over the Dutch, as well as the date of the great London fire. So, John Dryden was the first to use Annus Mirabilis.

And so, annus horribilis is a disastrous or unfortunate year.

I get the Merriam-Webster Word of the Day in my inbox, well, every day. Annus mirabilis was the word of the day for today, 1/1/2023.

So for this New Year's Day blog, the Merriam-Webster word of the day is my muse. And because of the email to my inbox this morning, I can ALSO see that the Word of the YEAR for 2022 is Gaslighting. 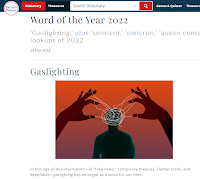 In this age of misinformation, the age of "fake news," conspiracy theories, Twitter trolls, and deep fakes, gaslighting has emerged as a word for our times.

A driver of disorientation and mistrust, gaslighting is "the act or practice of grossly misleading someone especially for one's own advantage." 2022 saw a 1740% increase in lookups for gaslighting, with high interest throughout the year.

A few things happened in the last days of 2022. One, was the long anticipated release of Trump's tax returns. I will try to keep today's blog apolitical. The point is this: had the tax returns been released years ago, there is a very good chance that history would have been very different. If the 2016 election went differently, I feel that COVID would have been handled differently. I am not sure that Russia would have invaded Ukraine. But we shall let the historians debate all of this.

Yesterday, my friend Tim from Essex Catholic High School pinged me on Facebook, and he sent me a picture from 1977. That year was annus mirabilis for me, to be sure. I became a Freshman at PURDUE in 1977, with my entire life and future mapped out. Medical School or bust! [ Spoiler alert: I don't have MD license plates.]

My friend Tim's father passed away yesterday. He had been sick for some time, but over the past few months his father deteriorated rapidly. He was moved to hospice on the 29th, and managed to hang on through the 30th, which is Tim's mother's birthday. A few days earlier, Tim's grandson was born - on Christmas Day.

Tim said, "I think, if Dad had any control at all over when he passed, he would have wanted to wait until after midnight on December 30th. He would not have wanted to die on mom's birthday. But, there was a residual effect to lasting until New Year's Eve, one that I did not anticipate: the day ended, literally, with fireworks. It was quite a send-off."

So, in 2022, Tim lost his father. Tim's father left the world, as Tim's newborn grandson arrived.

And with that, Happy New Year to all of you! Whatever you are excited to do at the start of 2023, I hope you're just as excited to still be doing it at the end of 2023. Just do it all with truth, love and kindness, and watch how everything works out just fine. Consistency is a gift that keeps on giving: Teach everything you know. Ask for help - get the help - then you too can pay it forward.

Day 1 of annus mirabilis is today. 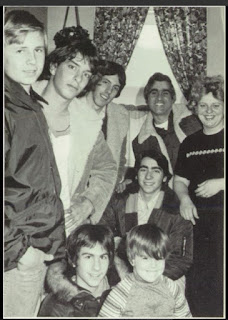 Posted by Thomas Capone at 6:53 AM