I'm not buying a snowmobile 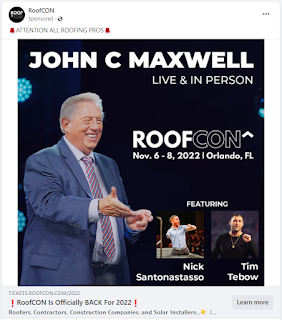 So, we need a new roof. It's time. Actually, we are probably past due. And so, I typed in "Roofing Contractors" into my trusty Google machine to see what's up. Wow, I had no idea that half of the adult population of America are Roofing Contractors. In fact, I guess that when you buy a new pickup truck these days, it must come with Roofing Contractor School flyers in the glovebox.

My story had a happy ending, as it relates to my roof adventure. Some people came out to the house. Some, just used Google Satellite pics to measure my roof and give me a quote - no need to come out to the house! (Ah, hard pass). I did meet a wonderful schoolteacher, who did not climb up on the roof, but she did take lots of pictures to send to her boss. A very lovely person, and her real job (teacher) is about to start - Labor Day is right around the corner.

Funny thing: now Facebook thinks that I am a Roofing Contractor. Now, the Social Media Gods think that I should attend the National Convention of Roofing Contractors (RoofCON). Well, I do like John Maxwell. Not sure I would have "CON" in the name. And, it turns out that I am an excellent candidate to buy a Roof Maxx franchise for only $35,000. It's actually a very impressive product and a great company. But I don't do ladders.

Remember that scene from the 2002 sci-fi movie "Minority Report," when a camera takes a retina scan of Tom Cruise's character and a billboard calls out to him, "John Anderton! You could use a Guinness right about now"?

I know for a fact that my Google Nest Mini speaker is spying on me. At this point, I'm just numb to it all. Google first filed a patent in 2008 to create advertisements based on environmental conditions present in the background of voice communications. You know, Google - the same guys who probably unleashed the first real controversy of the online privacy wars when they started sifting through our Gmail to serve us targeted ads. Now, we all use Gmail and we don't think about it anymore. Yeah, Google knows everything about my life - and don't even get me started about Facebook. 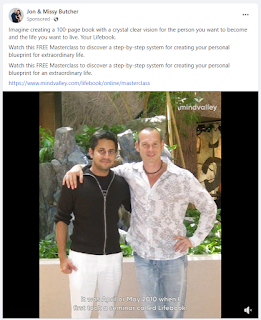 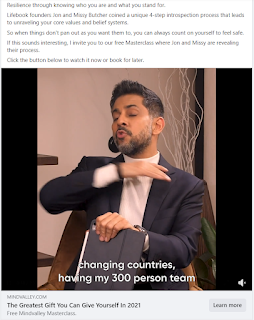 Today, the Meta/Google universe thinks that I am a candidate for a Roofing franchise. Nope, just need a new roof. I have recently interviewed some AMAZING people in the mental health and holistic medicine space. And Meta/Google are now both very well aware of this. Yeah, Amazon knows everything too. Let the ads for Yoga, Reiki and Mental Health flow.
[ My dude, 300+ person team? Have one of them fix the date on your damn Facebook ad you sent me...]

Next Generation marketing is just getting started. But just like anything in life, there will be those who get it right, and those who are basically children in a man's world. They are making rookie mistakes, and they are actually hurting their brand. If I Google "Mindfulness" don't invite me to an event in 2021 unless you also sell time machines.

As a goof (and a test) I said out loud to my wife: "You know, the first thing I am going to do when we move to Florida is buy a snowmobile." 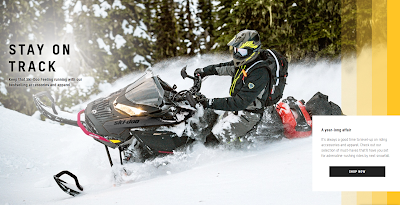 Posted by Thomas Capone at 5:56 AM