I have become a bookie

A bookie, short or slang for "bookmaker" is someone who facilitates gambling, most commonly on sporting events. Ah, but a booky is someone who is bookish; given to reading and learning lessons from books. 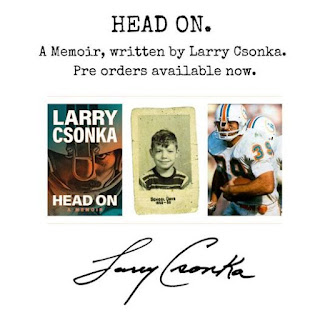 Lately I have been interviewing authors. Published authors of every shape and size. People who have written dozens (hundreds?) of books. And some people who "had a book in them" and had to get it out. And so, they did. This might be their first (and only) book that they ever write.

I was born in 1960. I was twelve years old and living in Boca Raton, Florida in 1972. Ah yes, the year that the Super Bowl Champion Miami Dolphins went 17-0. The Perfect Season.

Life has so many twists and turns. When I was 17 years old I went to PURDUE (not for football) but for Biomedical Engineering. It was only AFTER I was already living in West Lafayette, Indiana that I learned that Bob Griese was a PURDUE man. And, I don't think I spent much time from my college days until, well, until THIS YEAR thinking about Larry Csonka. Maybe I saw him on TV or HBO or such, over the years. And I would smile, and remember my days in Boca. 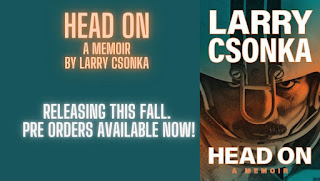 I have been interviewing Actors, Authors, Celebrities, Athletes, Thought Leaders, Subject Matter Experts. During the teeth of COVID, we did "Zoom Shows" interviewing Comedians, and many wrote books during their down time, since no one was going to comedy clubs during lockdown.

And now, 50 years later......50 years after the Perfect Season, Larry has written a memoir. And www.TomTalks.us with #39 is coming soon.

There is something magical about books, and now audio books. And something even more magical about how published authors can reach MILLIONS of people via the power of Zoom, or BlueJeans or the cloud. Virtual book signings are so cool, and had it not been for COVID I don't think they would have become a thing. Well now, they are a very big thing indeed. Audio books can become online courses, or Master Classes for the entire world to benefit from and enjoy.

So as of today, I don't have a bookie, but I think I have become a booky. But if I did have a bookie (or know a bookie) I would ask them: "What are the odds that a 12 year old kid living in Boca Raton, Florida in 1972 would get to interview his childhood hero, Super Bowl MVP Larry Csonka - 50 years later?" 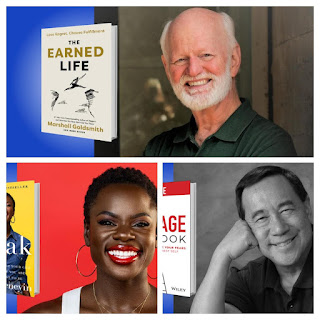