Man of the Moment

If you are reading on a smartphone, use landscape / hold phone sideways.
Last Friday I had the pleasure, the honor, the gift (...pass me the Thesaurus) of hosting a video podcast interview with Bill George. Bill George and Zach Clayton have a new book coming out in August. I have read Bill's past works, and I read the advance copy of the new book. THIS book - Bill's new book - is his best book.

Yes, the newest book is indeed the best book - at the moment. 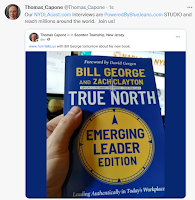 During the interview, I asked Bill about Jack Welch. In the 90s I did a lot of business with GE when they got into the "long distance" game. There was a time when "GE Exchange" was shaking up the telecom world. Heck, at the time, GE could have bought long distance company Sprint with pocket change.

I was in my 30s and I was in awe of all things GE and all things Jack Welch. I lived in northern New Jersey at the time, and at least once a month I would make the drive to GE headquarters in Connecticut. On my FIRST trip to GE, I met Jack. He shook my hand and asked three questions: who I was - what company I was with - and what is my golf handicap. His assistant wrote it down - name, what I do/who I was with - and my golf handicap. Back then - if you did not play golf - you were not serious about business. In fact, back in the day, if you were in Business School or studying for your MBA, it was highly recommended for all of the guys and gals to learn how to play golf. 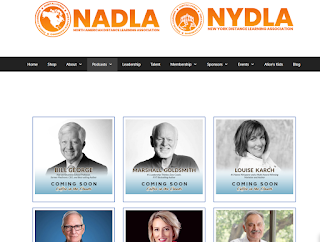 During the early 1980s, Welch sought to streamline GE. In 1981, Jack made a speech in NYC called "Growing fast in a slow-growth economy." Under Welch's leadership, GE increased market value from $12 billion in 1981 to $410 billion when he retired, making 600 acquisitions while shifting into emerging markets. Welch was dubbed "Neutron Jack" (in reference to the neutron bomb) for eliminating employees while leaving buildings intact. Welch valued surprise and made unexpected visits to GE plants and offices. Welch popularized so-called "rank and yank" policies. Each year, Welch would fire the bottom 10% of his managers, regardless of absolute performance. NO MATTER WHAT - the bottom 10% were fired.

By 1999 Jack Welch was named "Manager of the Century" by Fortune magazine.

Upon his retirement from GE, Welch stated that his effectiveness as its CEO for two decades would be measured by the company's performance for a comparable period under his successors. Jack had grown GE to over $450 billion in market capitalization. As of July 2022 GE has a market cap of $69 billion. Down from #1 to #184 (most valuable company). Oops!

As I write my Sunday Blog, I am reflecting on my business career. I thought Jack Welch was everything that I wanted to be. There was a time when I thought Donald Trump was cool. I rode in limousines with "The Donald" to Mike Tyson fights in Atlantic City. I would let my two young sons listen in on speakerphone to my calls with Trump, because that was impressive. Doing business with or simply hanging out with Donald Trump was impressive - at the moment. One year, my wife and I sat in Trump's VIP box at the US OPEN (Mats Wilander beat Ivan Lendl). "The Art of the Deal" was read by aspiring business leaders. In the 80s and early 90s it was cool to be like Donald Trump. Cool, impressive, something to brag about - at the moment.

In December 2016, Jack Welch joined a business forum assembled by then president-elect Donald Trump - to provide strategic and policy advice on economic issues.

In True North: Emerging Leaders Edition, Bill George and Zach Clayton issue the challenge to emerging leaders - from Gen X to Millennials and Gen Z - to lead their organizations authentically throughout never-ending crises to make this world a better place for everyone. NYDLA.org members shall get Bill and Zach's new book for free - as part of their paid membership.

And I can honestly say that the video podcast interview, my NYDLAcast.com with Bill was my best "Coffee in the Clouds" interview, ever. 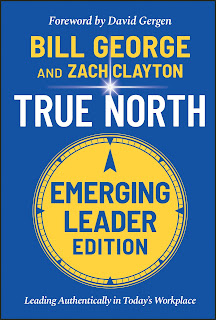 Posted by Thomas Capone at 6:31 AM