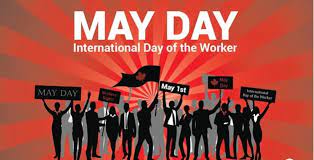 If you are reading on a smartphone, use landscape / hold phone sideways.
May Day, also called Workers' Day or International Workers' Day, is a day to commemorate the historic struggles and gains made by workers and the labor movement. It is usually observed in most countries on May 1.

So, May Day - a day that we reserve for fun springtime activities, like the maypole and picnics and golf and tennis - a day that kicks off summer with days at the beach and ice cream and such stuff, well of course that would be perfect for airplane pilots calling for help, right?

Well. May Day is not Mayday, the internationally recognized radio word to signal distress. It is used mostly by aircraft and boats. How many times do we hear Mayday! Mayday! Mayday! on a TV show or movie.

Mayday first came to be in 1923. There was a lot of traffic between England and France in those days, and there were enough traffic (and disaster) problems over the English Channel that a good distress signal was needed. One that everyone could easily use and understand. And, there were some problems with using S.O.S. for the radio (voice) such as: S.O.S. was great with Morse code. But aircraft used the radio and a pilot would not have time to clarify to anyone that it was S as in Sam and not F as in Frank. A short, easily understood WORD that could not be mistaken for something else, was necessary.

Mayday was the phonetic equivalent of "M'aidez", the French for "Help me."

So, there was an RAF "flying boat" whose engines failed over the Channel. And the pilot shouted out M'aidez M'aidez M'aidez over the radio and that was it. It stuck. M'aidez becomes Mayday. In 1927 the United States formally adopted Mayday as an official radiotelegraph distress signal.

Today is SUNDAY ("sun's day") and tomorrow is MONDAY ("the moon's day") and May Day is an ancient festival marking the first day of summer. International Workers' Day took over "May Day" but it is very different from the traditional May Day.

These days, both workers (and pilots) needed saving. See the Haymarket Affair, also known as the Haymarket Massacre, The Haymarket Riot, or the Haymarket Incident. It began as a peaceful rally in support of workers striking for an eight-hour work day.

So, on this SUNDAY we celebrate May Day and tomorrow will be MONDAY, where hopefully while at work - you do not feel the need to shout out Mayday! Mayday! Mayday!

Now you must excuse me, I need to get ready to dance around the maypole. 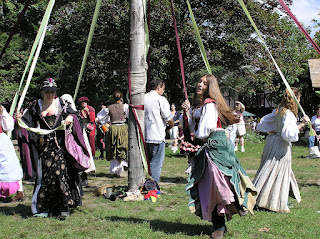 Posted by Thomas Capone at 7:39 AM