What you talkin bout, Tommy? 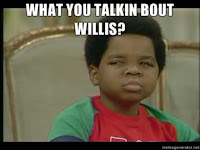 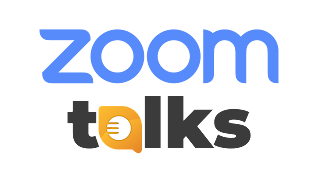 If you know me even a little bit, you know that NYDLA (and now NADLA) is powered by Zoom. We love all carriers, we sell, market, promote, install and represent pretty much everyone in the telecom and technology space - but we really love Zoom. If we were Footlocker, Zoom would be our Nike.
Well, in the spirit of David Letterman's Netflix specials "My Next Guest Needs No Introduction" and with a tip of the hat to TED.com talks, ZoomTalks.us (still in beta) is now LIVE. We did not tell THE WORLD yet, but you are special, so we told YOU. And the Zoomies are still tweaking the site, so...
OK, fine. If you want a "sneak peek" behind the curtain, you can click >>>  here.
But we are still making the sausage, as they say.
Conor Neill was our first Zoom Talk, a Coffee In The Clouds veteran. We are loading more Zoom Talks as you read this blog.
Actors. Authors. Athletes. Comedians. Entrepreneurs. Politicians. Scientists. Via the power of Zoom, we are spending 60 minutes with people who are (already have) changed the way we live, learn, work and play in the clouds.
Dan Rather just came out with a new book. LeBron James is paying it forward. Patton Oswalt is using his celebrity to make a difference in the world. Last night Patton hosted a virtual comedy show, with proceeds going to our favorite charity, Alice's Kids.

Teaching, training, coaching, mentoring - all via the cloud technology of the day. And then it hit me, while watching Patton make the world laugh last night (from my home): I don't have a favorite comedian. There are several that I would pay to see LIVE, and there are several that I would watch if they had an HBO special. How many people are there in the world who are actually FUNNY but never make it in the business? We have interviewed 20+ comedians for our Coffee In the Clouds series, and they are all FUNNY! But not all have made it to fame and fortune - or the big "Comedy Money".
Years ago, if you were a comedian, and you made it to "The Tonight Show" with Johnny Carson, you MADE IT. That was the Super Bowl for a comedian. Later, it would be the same for a comedian doing "Letterman" but not as big as doing CARSON. From 1962 to 1992, if you were a comedian and you did your set on CARSON, you were inducted to a special club. As the host of that nightly program for nearly three decades, Carson had an unprecedented influence on a generation of television viewers. His decision in 1972 to move his show from New York to California was instrumental in shifting the power of the TV industry to Los Angeles. 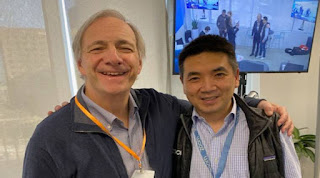 Ray Dalio & Eric Yuan
COVID and the pandemic changed the world forever. I don't think there will be a pre-COVID and post-COVID world. I think that the way we live, work, learn, play in the clouds is now forever. Just like Johnny Carson's move from New York to LA. The world changed forever.
Johnny Carson had to move to LA.
I had to move into my spare bedroom to host Zoom Talks.
My father used to say to me, "Show me your friends, and I'll show you who you are." That was HIS catchphrase. I must have heard him say that to me a thousand times. OK, Dad, I got it!
So to honor my Dad's catchphrase, here is my upcoming guest list (wish list?) for Zoom Talks:
Ray Dalio, Eric Yuan, Melinda Gates, Mark Cuban, Marc Benioff, Elon Musk, Jeff Bezos, Bill Gates, Michael Jordon, Robert Downey, Jr., Jerry Seinfeld, Oprah Winfrey....  and then NEXT month we can have...
[ see, I'm funny too! ]
Hey, I guess I'm going to need  to hire a sidekick to say: and heeeeeeerrrrrrrrsssss Tommy!
[ hat tip to Ed McMahon and "Heeeeeere's Johnnyyyy!" ] 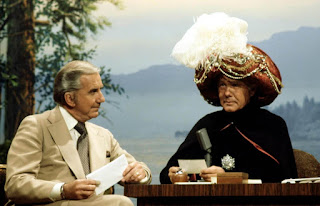 Johnny would have made a GREAT Zoom Talk!
Posted by Thomas Capone at 5:06 AM