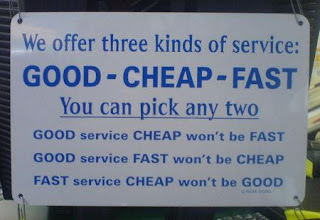 I am sure that you have seen or heard of the saying "Speed, Quality or Cost, pick any two."  I always smile when I come across that quote or meme.

If you want it fast with high quality, it will be expensive.

If you want it cheap and fast, it will be low quality.

If you want it to be of high quality and cheap, it will not be delivered fast.

It is understood that people might take a few minutes to try to think of a scenario where the speed, quality, cost triangle does not apply. But pretty quick, most people will just say to themselves, "yeah, that's true." Pick any two. 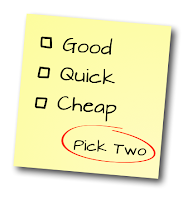 In 2000, Congress established a National Moment of Remembrance, which asks Americans to pause for one minute at 3:00 pm in an act of national unity. That time was chosen because that was the time when most Americans are enjoying their freedoms on the national holiday.

You cannot have freedoms without sacrifice.

But you cannot make a sacrifice for another, without putting the needs of others ahead of your own. And without gratitude for the sacrifice of others, there can be no freedoms in society.

As you pause for one minute at 3:00 pm tomorrow in a act of national unity, you shall be doing so during a national pandemic. At that time, there may be 100,000 who have died due to COVID-19 here in the USA.

We are currently fighting a different kind of enemy. Hopefully (all of us) can think about what it truly means to a hero, a patriot and a citizen of the United States of America.

Indeed, we must find a way to have all three at the same time, for without all three in harmony and in balance, none of the three can exist alone.

"Patriotism is not short, frenzied outbursts of emotion, but the tranquil and steady dedication of a lifetime." – Adlai Stevenson

"I have long believed that sacrifice is the pinnacle of patriotism."– Bob Riley

"A hero is someone who has given his or her life to something bigger than oneself."– Joseph Campbell

"It is foolish and wrong to mourn the men who died. Rather we should thank God such men lived."– George S. Patton

"Never throughout history has a man who lived a life of ease left a name worth remembering." – Theodore Roosevelt 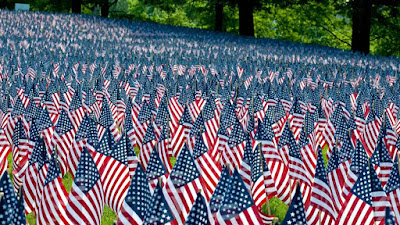