If you lived in the NYC area in the 70's you have heard Gerald Rosenberg's voice a million times. But you probably never knew his last name. 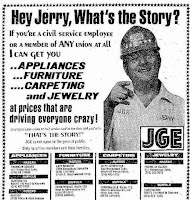 Jerry was an American television direct-response advertising salesperson most notable for promoting local businesses. His distintive balding scalp, rotund body, thick Brooklyn accent and impassioned sales pitches made him a recognized television presence in the USA, primarliy in the "New York Megalopolis."

If you do remember Jerry, if you were living in the NYC tri-state area in the 70's, or if you had TV coverage from the New York market in the 70's, I just gave you an earworm - sometimes known as a brainworm, sticky music, stuck song syndrome, or Involuntary Musical Imagery (IMI).

We just had the Super Bowl. We've come a long way from TV ads in the 70's and 80's. Radio was still king, with drive time radio spots out performing TV. The winning ads, the ads that we talked about at work on Monday, were all about the story. Yeah, some ads were cute, some were funny, but the ones that win the awards are mini movies - they are all about the story.

Earlier this month I did a video podcast with Chris Brogan.

Chris is the Yoda of Storytelling for Business.

All because of.....the power of story.

I had you at Yoda.

Now that TV and Radio have been replaced by "the cloud" and all things instant global mass media - it is even MORE important to know:

It's not who has the best story.  It's who can tell their story the best.

So that's the story, Tommy?

Posted by Thomas Capone at 5:37 AM