Lucky Charms is a brand of cereal produced by the General Mills food company. It first appeared in stores in 1964. The cereal consists of two main components: toasted oat-based pieces and multi-colored marshmallow bits (marbits) in various shapes.

In 2012, Lucky Charms posted its best year ever.

The company attributes this recent success to a change in marketing. The cereal moves from appealing to just children, towards one that is succeeding with adults as well. Consumers are also able to reminisce with a jingle that hadn't been used in more than a decade: "hearts, stars and clovers" - Lucky's Litany, in this recent national campaign. The company suggests that the jingle contributed to a rise in sales.

An estimate of 45% of Lucky Charm consumers are adults. In reaction to the campaign to target "nostalgia," new commercials have been created to accompany it.

A commercial created called "Transportasty" shows a woman rediscovering Lucky Charms at her office. She is then transported to presumably Lucky's magical forest, where Lucky then says, "You're always after me Lucky Charms." She responds to his famous line by saying, "I forgot how good these taste." And good for you, too, right? 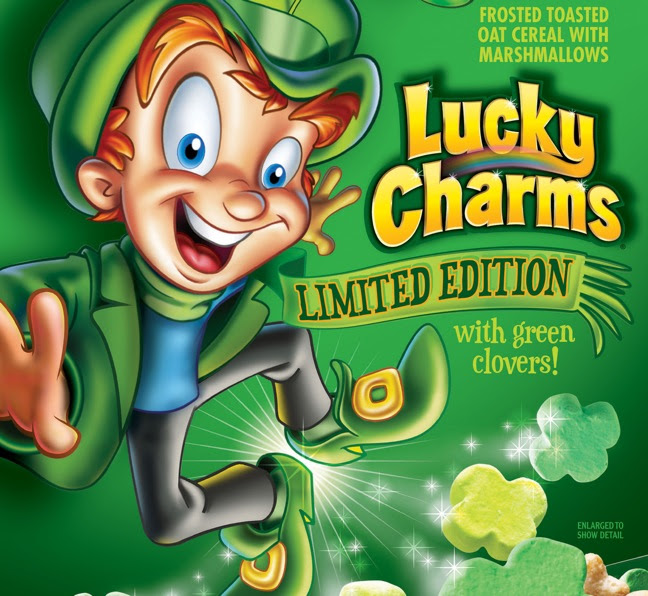 Along with the new commercials, a new Facebook page was also created to have loyal (adult) consumers discuss and reminisce on the changes with Lucky Charms over the years. However, the company is not moving away from kids. A new commercial of kids sneaking into Lucky's magical vault of charms was also created.

According to the manufacturer, Lucky Charms is 37% sugar by weight. This puts Lucky Charms at the highest end of "high sugar breakfast cereals."

OK all of you Social Media Marketing Gurus out there, let's review:
On this Feast of Saint Patrick, don't forget to start your day with a big heaping bowl of Lucky Charms!  They go great with lots and lots of green beer. And, if you drink a little bit too much today, just think how "colorful" your evening will be! 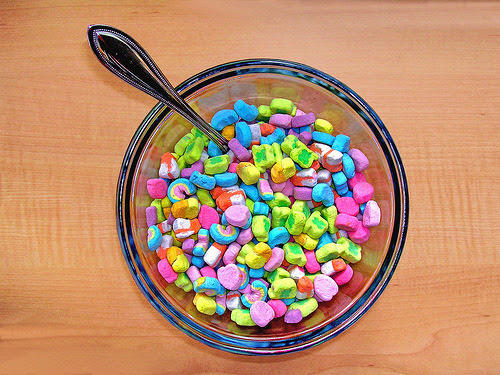 Posted by Thomas Capone at 5:25 AM