Getting Schooled in BOONTON (USA)

[If you are reading on a smartphone, use landscape mode / hold phone sideways] 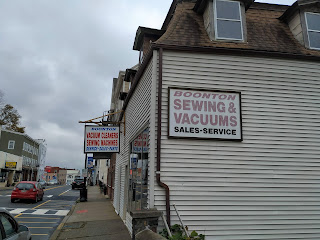 I went to Main Street Boonton (USA) yesterday to buy vacuum bags.
We have one of those in-house vacuum, central vacuum systems that sucks dirt through hidden 2-inch pipes down to a 12-gallon canister in the basement. So, instead of maneuvering a heavy, noisy portable vacuum up and down stairs and from room to room, we have a 30 foot hose that plugs into special wall outlets, which automatically starts the two vacuum motors.
So anyway, I went to Main Street Boonton (USA) to buy vacuum bags. And that's where I met Ed.
Ed owns and runs Boonton Vacuum. FOR YEARS.
Here are some of the things I did not know before yesterday:
The idea of using in-wall plumbing to clean houses goes back to the 1850's in Sweden, where horse-powered fans created suction. Eventually, horses were replaced by servants who either pumped giant bellows or, in later years, pedaled stationary bicycles. Even when the electric motors arrived at the turn of the century, these systems were only within reach of the very wealthy magnates like Henry Ford and George Eastman. Then portable vacuum cleaners hit the market in the 1920's, and their whole-house cousins were left in the dust.
But wait, there's more.
Central vacuums weren't forgotten entirely. Frank Lloyd Wright, impressed by their clutter-free convenience, specified them in a number of his later designs. The systems became more affordable in the late 1950s when plastic pipe began to replace copper, but they did not really come into their own until 1990s, when growing house sizes and concerns about indoor air quality coincided with improved filtration, more powerful motors and more effective vacuum attachments.
Ed is in his 70's easy. Maybe 80's. I noticed his accent, and asked him where he was from. Ed is from Zagreb, Croatia. "Oh, one of my best employees lives in Zagreb, Croatia. He has been with me for many years, working remotely" I said in passing.
Once again, my words activated the launch sequence with Ed.
Turns out that Zagreb is the capital and the largest city of the Republic of Croatia. It lies on the intersection of important routes between the Adriatic coast and Central Europe. In 1929, King Aleksandar proclaimed a dictatorship and imposed a new constitution which, among other things, renamed the country the Kingdom of Yugoslavia. The territory of Croatia was largely divided into the territories of the Sava and Littoral Banates.
It also turns out that Croatia is home of the world's biggest truffle. Croatia has the highest number of UNESCO Intangible Goods of any European country. Zlatni Rat Beach changes in shape and color depending on the wind. And of course, Croatia has the richest collection of remains of Neanderthal people in the world.
And, as I turn to leave (twenty to thirty minutes later) I learned that Croatia is a lovely place to visit, with charming old cities and towns, gorgeous beaches and coves, distinctive foods, and incredible cultural riches.
Oh, one more thing. An interesting fact about Zlatni Rat Beach. One mistake people make when imagining the beach, is that it is a sandy beach. Well, it is not a sandy beach. Zlatni Rat Beach is a pebble beach. The pebbles are small, fine, round stones which are nice to walk on. 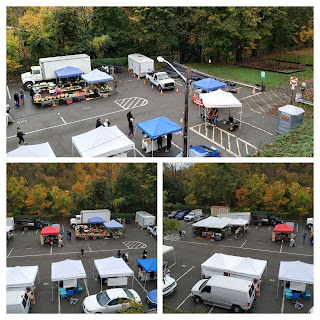 I left Ed and walked down the stairs to the Boonton Farmers Market, following social distance protocols of course. I bought some honey from a local farm. But there was no conversation. I did not learn anything about the honey, or how honey is farmed, or about the people selling the honey. It was just a 30 second transaction. I did not learn anything about honey or people or anything.
I also got two Taylor Ham Egg and Cheese sandwiches. Two for $10 is a bargain. There is a reason why people stand in line (or call their orders in) as these sandwiches are to die for. But once again, no conversation. Just a 15 second transaction. Pay, wait for the sandwich. They did bring it out to my car (social distancing and all) which was nice.
I could not stop thinking about my customer service experience with Ed. I expected to be in his shop for 3 minutes tops, just to buy some vacuum bags. I think I was there for no less than half an hour. It could have been much longer.
When I returned home, I told my wife all about my adventure on Main Street Boonton (USA).
"Did you know that there is only ONE 'BOONTON' in the entire USA? And that people used to get USPS mail addressed to just BOONTON USA" I said to my wife. You could mail a letter to Tom Capone, Boonton, USA and that would be just fine, that was enough. Kinda like sending mail to The White House and it will get there, because there is only ONE White House. Ed told me all about it.
Because I bought six vacuum bags, two packs of three. I don't know when the next time I will need to see Ed. We vacuum every Saturday, so it could be a year before we need to get vacuum bags again.
My wife said that she might stop into his shop next week, because she has a sewing machine that needs fixing.
"I'll take it in for you" was my response. No problem.
Without hesitation, I'll do it. I don't want to miss out on a chance to attend office hours with Professor Ed.
Yeah. The Boonton (USA) School of Business.
Priceless. 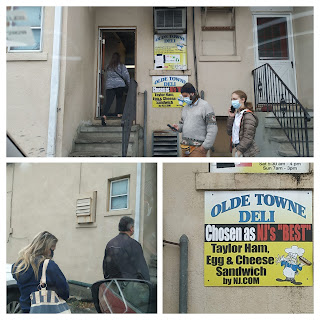 Posted by Thomas Capone at 5:32 AM