A placebo is anything that seems to be a "real" treatment -- but isn't. It could be a pill, a shot, or some other type of "fake" treatment. What all placebos have in common is that they do not contain an active substance that will affect health.

What Is the Placebo Effect?
Sometimes a person can have a response to a placebo. The response can be positive or negative. For instance, the person's symptoms may improve. Or the person may have what appears to be side effects from the treatment. These responses are known as the "placebo effect." There are some conditions in which a placebo can produce results even when people know they are taking a placebo. Studies show that placebos can have an effect on conditions such as:
In one study involving asthma, people using a placebo inhaler did no better on breathing tests than sitting and doing nothing. But when researchers asked for people's perception of how they felt, the placebo inhaler was reported as being as effective as medicine in providing relief.

How Does the Placebo Effect Work?
Research on the placebo effect has focused on the relationship of mind and body. One of the most common theories is that the placebo effect is due to a person's expectations. If a person expects a pill to do something, then it's possible that the body's own chemistry can cause effects similar to what a medication might have caused.
Experts also say that there is a relationship between how strongly a person expects to have results and whether or not results occur. The stronger the feeling, the more likely it is that a person will experience positive effects. There may be a profound effect due to the interaction between a patient and health care provider. The same appears to be true for negative effects. If people expect to have side effects such as headaches, nausea, or drowsiness, there is a greater chance of those reactions happening. 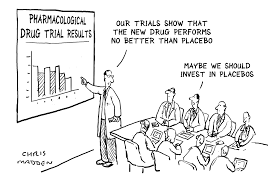 The fact that the placebo effect is tied to expectations doesn't make it imaginary or fake. Studies show that there are actual physical changes that occur with the placebo effect. For instance, studies have documented an increase in the body's production of endorphins, one of the body's natural pain relievers.
Critics of the practice responded that it is unethical to prescribe treatments that do not work, and that telling a patient (as opposed to a research test subject) that a placebo is a real medication is deceptive and harms the doctor-patient relationship in the long run. Critics also argued that using placebos can delay the proper diagnosis and treatment of serious medical conditions.

Legitimate doctors and pharmacists could open themselves up to charges of fraud or malpractice by using a placebo. What say you: is lying to (a patient, a customer or ...a voter) ever OK?

How we make people feel is one of the most important things in life. There is an old joke where the full-figured wife asks the husband: “Does this dress make me look fat?” Is there ever (ever) a time when the husband would be so dumb, so stupid as to say yes to such a question?

You can argue that relationship building, questioning skills, networking, and presentation skills are all part of the "selling process," and I agree. But I stand firm on this point: that buying motives are a million times more powerful than selling skills.

Think of your buying motives. Why do you buy? You decide that you need or want something. Then you justify the need or the want, and you literally search for it. You set out on a Saturday afternoon to spend money. You may go "shopping," or you may go directly to the establishment that has what you want. Either way, your motive is clear: you want ownership as soon as possible! If someone’s buying motive is strong enough - spouses, children, parents, and especially salespeople - can't keep you from getting what you want. Logic? Facts? Ha! I WANT IT!!!! And I want it NOW!

And buy the way, that need is defined as an emotion - it has nothing to do with logic. One of the primary motives for buying is an emotional one. And in the emotional state, people will overpay to get what they want.

So: Why did Trump win the election?

Trump was the better salesperson, by several levels of magnitude.

Donald J. Trump has spent his entire career mastering the “Art of the Deal” as a master salesman and professional marketeer. President Elect Trump knows that people would rather BUY A PLACEBO - all the while KNOWING that it is only a placebo - than be SOLD anything.

Could there ever be a bigger “placebo” than telling the folks in West Virginia that he will be bringing back all the jobs to the coal miners? What would you rather hear: coal jobs are coming back! Or: you need to forget about your coal mining jobs, as that is a dying industry. Sorry, you need to be re-trained in other careers.

West Virginians  voted for the placebo, big time. Same goes for climate change, or immigration or any other inconvenient truth. Big complex problems are rarely solved with short sentences.

This is the funny thing about placebos - they can work, they can make a patient feel better - even when the patient knows all along that they are taking nothing more than a sugar pill. But all the while that a placebo is making the patient “feel” better, a placebo is not doing anything to cure what ails them. 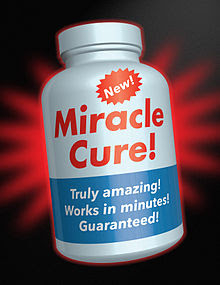 Posted by Thomas Capone at 9:33 AM