Sugata Mitra is the winner of the 2013 TED Prize:
Build a School in the Cloud, where children can explore and learn from one another.

Education is a self-organizing system, where learning is an emergent phenomenon.

The Victorians were great engineers. They engineered a [schooling] system that was so robust that it's still with us today, continuously producing identical people for a machine that no longer exists. 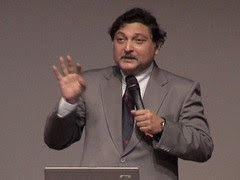 It's quite fashionable to say that the education system's broken — it's not broken, it's wonderfully constructed. It's just that we don't need it anymore. It's outdated.


Ever watch a TED.com talk?
TED (Technology, Entertainment, Design) is a global set of conferences owned by the private non-profit Sapling Foundation, under the slogan: "Ideas Worth Spreading".

TED was founded in 1984 as a one-off event. The annual conference began in 1990, in Monterey, California. TED's early emphasis was technology and design, consistent with its origins in the Silicon Valley. Since June 2006, the talks have been offered for free viewing online, through TED.com. As of April 2014, over 1,700 talks are available free online. By January 2009 they had been viewed 50 million times. In June 2011, the viewing figure stood at more than 500 million, and on Tuesday, November 13, 2012, TED Talks had been watched one billion times worldwide. TED's mission statement:

We believe passionately in the power of ideas to change attitudes, lives and ultimately, the world. So we're building here a clearinghouse that offers free knowledge and inspiration from the world's most inspired thinkers, and also a community of curious souls to engage with ideas and each other.


The TED Prize was introduced in 2005. Until 2010, it annually granted three individuals $100,000 and a "wish to change the world". Each winner unveils their wish at the main annual conference. Since 2010, in a changed selection process, a single winner is chosen to ensure that TED can maximize its efforts in achieving the winner's wish. For 2013, the prize amount was increased to $1 million.


Now, here is your homework assignment:

Why? Because "Everything is Distance Learning"
Posted by Thomas Capone at 7:22 AM