What time is the game on?

A month ago, the notion that the Giants would play in the NFC Championship Game this weekend was as far-fetched as their coach Tom Coughlin canceling practice and instructing his players to just show up for the game on Sunday.

But the Giants owned one very vital commodity – control of their postseason destiny. All they had to do to make the playoffs was win. And that’s exactly what they’ve done. They dispatched the Jets and Cowboys in the final two regular season games to win the division title and  and  to open the postseason. The margin of victory in each of the four games was at least 15 points, the first time the Giants have done that since their surge to the championship to close the 1986 season.

Twenty-one years ago today, the Giants defeated the 49ers, 15-13, in an NFC Championship Game in Candlestick Park. A week later, they defeated  in Super Bowl XXV. It seems like only yesterday - were does the time go?


The first thing I did this morning was to go to www.tvguide.com to find out what time the games were on today – especially the Giants game. *I already knew the time of the big game, I was just double-checking. I also put it on my Google Calendar, alerting the outside world that I would not be available during this critical time. When things are really important to you, you might even triple check. When things are really important, you make time for them.
You give but little when you give of your possessions.
It is when you give of yourself that you truly give.


I just planned my day (my entire weekend) around the Giants game. Mentally, I was thinking about this Giants 49ers game for days, but now - today - it’s serious: I am using the Internet. I set a reminder on my Google calendar, and I tweeted on it, and I posted about it on Facebook. Everyone that knows me at all now has a keen insight as to my plans to watch the game – the BIG game today.


Yesterday is history. Tomorrow is a mystery. Today is a gift.
That’s why we call it "the present".
The Giants will win today - no question. This means a trip to the Super Bowl. That will be my “present”. The 46th Super Bowl will take place on February 5th, 2012. Kickoff time is scheduled for 6:30EST / 5:30 CST on NBC.  You can start planning your Giant’s Super Bowl party here
The greatest gift you can give another is the purity of your attention.
I recently had a friend from Canada visit New York City for a convention. We talked for weeks about getting together in New York. We chatted about how much we were looking forward to meeting in the city – for lunch, for dinner, for drinks – or even just for coffee. We both had access to more scheduling tools then you can shake a stick at, all just to “make it happen”. Cell phones, emails, twitter, texts, Facebook, Skype, online calendars, etc.  We had access to more collaboration and time management tools - more technology than it took to create and air the iconic Apple® Super Bowl ad in 1984. And yet, the New York City convention came and went, and we never had our live, in-person meeting. We did not take the necessary steps - we did not make the time for it. I just spent more time planning my TV time for the Giants 49ers game, than I did to meet my friend for real, human interaction. And now, we are chatting about it, emailing about it, and now - no one is happy about missing this opportunity to grow our frieindship.

In football, clock management is an important aspect of game strategy. The team who holds the lead in the game will want to use as much time as possible, while the team that is trailing will want to conserve time so that there is enough to try to score. There are dozens of books written on Football Clock Management.
“Lost time is never found again” ~ Benjamin Franklin

My technology epiphany today is to realize how much time and money we spend every day on making money and managing time.  When something is important to you, you will always find the time – you will MAKE the time for it.  Being busy is not an excuse; we are all busy. We all have access to cell phones, computers, email, and social media tools. Maybe my friend and I should have used www.MeetUp.com to coordinate our date in NYC. Heck, I might even have an old fashioned paper calendar still laying around the house somewhere. When it is important enough to you, you will make the time for it.
How many of the tools, toys, and modern gadgets that you use every day, are really designed to help you to do more, with less?  What are you doing with all of that “time” that you are saving?  It is easy see how “time management” is so important in sports. Time management can’t be more important to the world of sports, than it is to our everyday lives, right?
I am going to take my wife to lunch, and I am not going to watch any TV today.  I will also find the time to take my best friend Bella for a nice, long walk. Yeah, that's the ticket.  No TV time for me today. Until the afternoon. 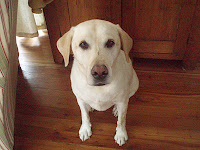 Posted by Thomas Capone at 6:33 AM