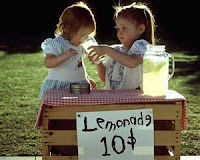 The great philosopher and business mentor Yogi Berra once said “You can observe a lot by just watching”.

This summer we had more kid owned and operated “Lemonade Stands” in our neighborhood than I can remember. I always make it a point to stop and make a purchase from such aspiring young entrepreneurs. I am waiting for the day (and I am sure this day is coming) when I pay $0.50 for the cup of ice cold lemonade – soon followed by an “offer I can’t refuse” - to purchase the “lemonade antidote” from a proud member of New Jersey Lemonade Stand Union Local 1245.

All kidding aside, here are some of my keen observations from the 2011 Lemonade Stand Season:

Some lemonade stands look like they were built from a kit purchased at IKEA®. Others are made out of “ready for the dumpster” card tables. Some lemonade stands are constructed out of discarded cardboard boxes from a neighbor’s major home appliance delivery.

Some lemonade stands have a linen tablecloths and real glassware; others have paper cups, while some young entrepreneurs have completely forgotten about supplying the cups – or management has assumed that you would simply “bring your own” paper cups.

Some lemonade stands have beautifully detailed hand-painted signs on poster board stock that could win a high school art contest. Other stands have scribbled hard to read letters on brown paper bags. Oh, but the lemonade is really, really good! Ah, right.

Some lemonade stands have igloo® coolers chock full of supplies and plenty of ice; others have run out of ice or never had any ice in the first place. By the way, how did the ice cubes get into my cup? I see no ice tongs, but I do see lots of chubby little hands attached to adorable little kids with runny noses (and no food handler gloves) going in and out of the cooler. Is there any wonder why some lemonade stands have repeat customers, while others do not? I like the ones that give you the lemonade in a paper cup with a paper napkin. And they have a trash can, too. It’s such a nice touch – some kids think of everything!

Dr. Freud theorized that the core of personality of an individual is formed before age 6. Others believe that the core of each person's style of life is formed by age 5. Psychologists say that most people do not change, and if they do change, they don’t change very much.

Over my many years of being in business, I have had the pleasure of working with many successful entrepreneurs, as well as key executives of Fortune 1000 companies. Some of these folks earned MBA degrees from prestigious business schools. Others received their degrees from the “School of Hard Knocks”. As I think about the most successful and passionate of the business leaders that I have known, I think about the “lemonade stands” they must have owned and operated when they were kids.

Do the successful businessmen and women of the world ever allow their lemonade stands to run out of ice? Or not have the ability to break a $20, or be able to make change (or accept credit cards?)

Do the successful businessmen and women of the world sit by the side of the road, hoping that someone stops and make a purchase? Or do they make the signs, do the marketing, and “seek out” new clients (Twitter, Facebook, Social Medial, etc.) thereby making their own luck?

Do the successful “lemonade stand” owners of the world do the necessary research (more lemonade sells on hot sunny days vs. chilly rainy days)? Or do they just “wing it” and hope for the best?

So my freinds, what did your lemonade stand look like when you were growing up? Never had one you say? Well, as my business mentor Yogi Berra says, “It ain't over till it's over.”

Get your very own lemonade stand right here: http://lemonadestandgame.com
Posted by Thomas Capone at 7:40 PM