A Bridge Too Far

How does one go about building a bridge? I mean, think about the most famous bridges in the world: The Golden Gate Bridge in California, The George Washington Bridge in New York, The London Bridge in – well - in London. The London Bridge is a bridge over the River Thames, connecting the City of London and Southwark, in central London. A “London Bridge” has existed at or near the present site since the Roman occupation nearly 2000 years ago. The first bridge across the Thames in the London area was probably a military pontoon bridge, built of wood by the Romans on the present site around AD 50.

Now ponder this; how does this all of this “bridge building” actually happen anyway? Does someone wake up one day and say “Man, it sure would be cool if we could get way over there, from way over here, really, really fast”!

Bridges don’t get built if only one person has the idea; the idea has to spread, and it has to spread big. There has to be a “tipping point” where enough people in a society say “you know what we need? We need a bridge!” to get things to actually happen. Money has to be raised (or in the case of the Romans, slaves had to be captured) local governments, (or kings, rulers or dictators had to give the command). The “pain” of not having a bridge must become so great, the discomfort so unbearable, the concept of life “without a bridge” must become so unpleasant that not building the damn bridge is just no longer an option. The idea of not having a way to get from “over here - to over there – really fast” is no longer acceptable by society. We must do whatever it takes, bear any burden, endure any pain, but a bridge we shall build!

When the Golden Gate Bridge was built, eleven men lost their lives. Until February 17, 1937, there had been only one fatality, setting a new all-time record in a field where one man killed for every million dollars spent had been the norm. Ten more men lost their lives when a section of scaffold carrying twelve men fell through the safety net. With the George Washington Bridge, twelve men died. Building The Brooklyn Bridge cost fifty four men their lives.

This blog could be about building tunnels, or dams or even skyscrapers, but let’s stay with the bridge theme, since they have been building bridges for thousands of years. Bridges are hard to build, expensive, incredibly dangerous to construct (and maintain) and they take years to complete. If you were around in 1937, working on the Golden Gate Bridge was a glamorous job; it was like being a NASA Engineer in the 1960’s.

In my lifetime, I must have crossed the Hudson River from New Jersey to New York at least a thousand times. New York City (an island) would have never become the largest city in the world, if it were not for the impressive bridge and tunnel system. It would have just been too much of a pain to take a ferry, every time you wanted to cross the Hudson. To become the largest city in the world, New York needed bridges – and lots of them. I still get a little excited when crossing the Hudson River; you can’t help but think back to what it must have been like to be a worker on this thing, so many years ago. Makes asking “How was your day?” a little more interesting conversation at the dinner table.

Some of the largest accomplishments by modern man were born first in the minds of just a few, and then the ideas were brought to fruition during the worst of times. The idea of landing a man on the moon was made real, during the years of the Vietnam War. Bridges, tunnels and hydroelectric power plants (Hoover Dam) were dreamed up during the depression, and yet these projects became very real indeed. By the way, there were a total of 114 deaths associated with the building of the Hoover Dam.

The Dwight D. Eisenhower National System of Interstate and Defense Highways, (commonly known as the Interstate Highway System, Interstate Freeway System or the Interstate), is a network of limited-access roads including freeways, highways, and expressways forming part of the National Highway System of the United States of America. The system, which is named for President Dwight D. Eisenhower who championed its formation, serves nearly all major U.S. cities. Construction was authorized by the Federal-Aid Highway Act of 1956, construction took 35 years. The network has since been extended and as of 2006 it had a total length of 46,876 miles. About one-third of all miles driven in the country use the Interstate system, and of course it has many, many bridges. The cost of construction has been estimated at $425 billion (back in 2006).

Do you think solving the problems of the world’s economy is tough? Or fighting the war on terror? Try building a massive bridge fifty, one hundred, or even two thousand years ago. Every big, hairy audacious thing that mankind ever accomplished, started out as an idea by just a few, and then that good idea spread. Each individual concept of “not having a bridge” right here where we need one slowly grew and grew, until the reality of not having a “bridge” was just too painful to live with.

How do any bridges (real or virtual) ever get built? Just look at the past two thousand years for your answer. A tipping point occurs, when enough people say, “can you imagine what life would be like, if we could go from over here, to way over there, really, really fast?” Life without that bridge is just not acceptable! We just have to build the damn thing; we just have to do it!

OK, Tommy, now bring it all home. Tie it all together for ‘em with a nice bow:

Let’s start with the US economy, and then when we have it all under control, we can go after world hunger, fresh water for all, global warming and anything else that comes up in conversation.

Building bridges of any size or type is very hard, there is no question. I wonder how many bridges there are in the entire world? And yet, every single bridge that ever existed on the planet - the big ones and the small ones - all started with a good idea from a small group of passionate people, and that good idea reached a tipping point. 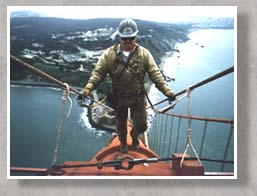 Posted by Thomas Capone at 5:15 PM