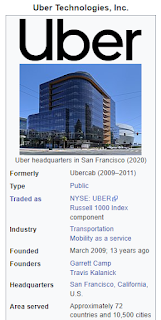 I first heard of "Uber" with UberConference, born out of Google Ventures. Today, it is safe to say that when you hear or say "Uber" you think of Uber Technologies, Inc. the American mobility service provider. Formerly Ubercab, they became "just Uber" the way that The Facebook became "just Facebook".

The big news today is that you can hail a Yellow Cab via the Uber app.

A few years ago, I formed a new staffing company for the global gig economy. Ah yes, what to name it? Of course: UberStaff.

Uber became so prominent in the sharing economy that commoditization of service industries using computing platforms has been referred to as uberisation, and several startups have described their offerings as "Uber for X".  Yeah, like I did with www.UberStaff.us

Uber has posted hundreds of millions (or billions) of dollars of losses each year since 2014. Like similar companies, Uber has been criticized for the treatment of its drivers as gig workers and independent contractors, disruption of the taxicab business, and an increase in traffic congestion. Uber has been criticized for various unethical practices and for ignoring local regulations.

Last week in my blog I mentioned how NFL Head Football Coach Bill Parcells would say "You are what your record says you are" and I love that quote. I think that the same goes for the naming of a company. You cannot be Uber if you are not really Uber. If the world says you are Uber (great, good, super, excellent) then that is fine.

But just naming yourself Uber because you say so, well, that could lead to failure. 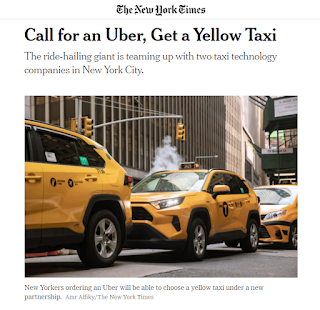 Posted by Thomas Capone at 7:32 AM