Every Dollar is a Vote

"Voters don't decide issues, they decide who will decide the issues." ~ George Will

Every dollar is a vote - in some principles of economics, "Dollar Voting" was the term used to describe the process by which consumer's choices influence production decisions. Products that consumers buy will tend to be produced in the future. Products that do not do as well as expected will receive fewer productive resources in the future. Effectively, according to this analogy, consumers are voting for "winners" and "losers" with their purchases. This argument was used to explain and justify market allocations of goods and services under the catchphrase "consumer sovereignty".

Do consumer boycotts ever work? The goals of selective boycotts, or dollar voting, have been diverse, and have included a desire to see decreased corporate revenues, removal of key executives, or reputational damage.

Colin Rand Kaepernick is an American civil rights activist and former football quarterback of the NFL.

Aaron Charles Rodgers is an American football quarterback for the Green Bay Packers of the NFL.

One of these guys got into trouble for protesting against racial injustice, police brutality, and systematic oppression in the country. The other, committed multiple violations of NFL COVID-19 protocols for unvaccinated players, including attending parties with teammates while not using PPE and appearing unmasked at multiple postgame conferences. One of them lied to the world about their position. Let's see how it all unfolds.

AT&T is now "in the barrel" for supporting far-right media companies like OANN.

I learned of the website Buycott.com - a tool that suggests whether a consumer should buy or avoid products and/or services based on how well it aligns with the consumer's values and principles. The consumer joins to various Buycott campaigns to indicate their support or their opposition to various issues and topics. Via using the app, the average supermarket shopper now (can instantly) know that buying Brawny paper towels, Angel Soft toilet paper or Dixie cups equals contributing cash to Koch Industries through its subsidiary Georgia-Pacific. The Koch Family is an American family engaged in business, best known for their political activities and their control of Koch Industries, the largest privately owned business in the United States.

Where are you going with this Tom?

Billionaires with "more money than God" should have the freedom to listen to their conscious. Are you "for or against" clean drinking water, feeding hungry children, saving the planet - basically protecting truth, justice and the American way? Billionaires with more money than they can ever spend in their lifetime, should be able to make fast, easy decisions on (many) very simple questions, yes?

When you buy something - anything - you are voting. Dollars are Votes. Corporations Power Politics. No one can get elected for any office in the USA without significant financial backing.

Remember back in 2010 when boycotts of BP filling stations were in overdrive? This was due to BP's failed efforts to stop a massive oil leak in the Gulf of Mexico. In hindsight, it turns out that roughly 10,000 BP filling stations/convenience stores in the USA are independently operated. Ultimately small, local entrepreneurs and their families were the ones that got hurt by the boycotts, not BP.

If Facebook offered me a ton of money to sponsor NYDLA.org should I take the money? What about AT&T? Or Koch Industries?

Let me end it here. Consciousness and Awareness, both words seem to carry the same meaning, but they do not. Conscious simply means alert and awake. Awareness is having knowledge of something. And guilt is responsibility for wrongdoing, while conscience is the moral sense of right and wrong.

"Voters don't decide issues, they decide who will decide the issues." ~ George Will 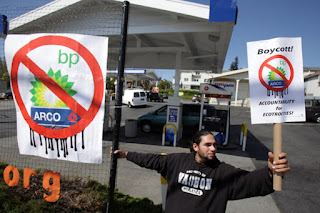 Posted by Thomas Capone at 7:01 AM