It's not like it's carved in stone or anything... 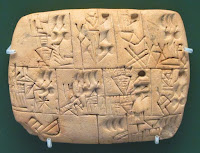 This morning, I got my "daily" blog from Seth Godin, Chris Brogan, Beth Fitzgerald - and several others. I think I get around a solid dozen daily blogs into my inbox, give or take a dozen. There was a connected theme to many of today's blogs, which prompted me to say out loud, over my shoulder: "OK Google.  What is the oldest recorded history?"

Our ancient human ancestors developed language around 35,000 BCE, which is when the world's oldest cave paintings were created.  "OK Google. What does BCE stand for?"

Half second later: "BCE stands for "before the common (or current) era". It is a secular version of BC (Before Christ). " 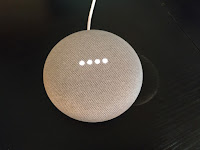 In 2016, a 5,000 year old Sumerian cuneiform tablet from the ancient city of Uruk (what is now Iraq) was revealed to be a payslip. The most interesting thing about this payslip is that it says that workers were sometimes paid with - beer. Compensating workers with alcohol wasn't a practice unique to the Sumerians, the Egyptians also paid workers with beer for working on the pyramids. While it might seem a little odd to our modern customs, paying workers with beer was sensible because it doubled as a food source because it was loaded with starches and nutrients.

One of the earliest known humans is Homo habilis, who lived about 2.4 million to 1.4 million years ago in Eastern and Southern Africa. Wow. 2.4 million years. And we (humans) only started to "write stuff down" a few thousand years ago!

A few years ago, I started doing an audio podcast. Because, well, everyone was doing it. "OK, Google. When did podcasting become popular?"  2004.

So, blogging gave way to audio podcasting, which led to video podcasting. I just was told that we (NYDLA.org) have just completed our 100th "NYDLAcast" video podcast interview with actors, authors, entrepreneurs, and overall very cool people.

Since 1953, we went from reaching the summit of Mount Everest for the first time - to "trash and overcrowding" at the top of the world to becoming a real problem. Today, Everest is so overcrowded and full of trash that it has been called the "world's highest garbage dump."

And so, because of ALL OF THIS...  I am now very optimistic. Yes. I am amazingly and shockingly optimistic for the future - our future. Recorded history is only a recent development. Folks, we only started to WRITE STUFF DOWN a few thousand years ago! Less than 5,000 years!

Everything good (or bad) that we did to the planet (and to other people) only became HISTORY a few thousand years ago. If it was not "carved in stone" (or painted on a cave wall) it was not going to make it past the weekend. "OK, Google. When did the term "weekend" first come to be?"  1900's during the Industrial Revolution.

From pollution and tons of trash left behind on Mount Everest, to the International Space Station, it all happened in the blink of an eye. Heck, electricity only started to become popular in 1882, when the USA started to generate electric power, to give the newly invented electric lightbulb its juice.

Everything that we humans broke on the planet, we can fix. Everything that we consider to be "good" in the world, happened in only the past several thousand years. We went from carving stuff in stone, to having around, 6,542 satellites orbiting the earth as of January 1st, 2021. I did not know this number 40 seconds ago. Google just told me. In less than a second, Google spoke to me. SPOKE to me, like the way a living person would speak to me. Just pause and think about that for a few seconds.

The "DL" in NYDLA went from Distance Learning to DIGITAL Learning to DIGITAL LIVING, thanks to the Internet. And, "The Internet" is less than 50 years old, in total. Now we have AI, and IoT and smartphones, and YouTube and TED Talks and listening to books on Audible. This blog (yeah, this one...) will reach millions of people this Sunday morning. Not for any other reason than this: it's on the Internet. Well, I have been writing a Sunday Blog for around ten years. Almost every Sunday. And I do have a following.

Hey, I did not say my Sunday Blog was any good. I just said that millions of people will see it... I have no idea how many will actually READ it.

Wow. In less than 5,000 years, we went from writing almost NOTHING down, to writing EVERYTHING down. No hammer and chisel required. Heck, no pen or paper required!

How long before we just need to think it, and it is in the history books....??? 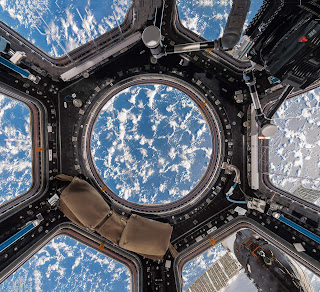 Posted by Thomas Capone at 6:24 AM