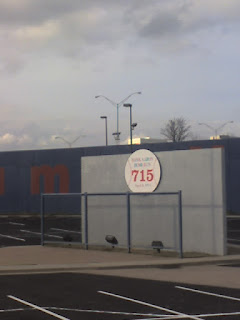 If you are reading on a smartphone, use landscape / hold phone sideways.In baseball, a home run is scored when the ball is hit in such a way that the batter is able to circle the bases and reach home safely in one play without any errors being committed by the defensive team in the process.

In the early days of the game, when the ball was less lively and the ballparks generally had large outfields, most home runs were of the inside-the-park variety. Hence, the home "run" was literally descriptive. FAST RUNNERS hit home runs. Speed was more important than strength.

We recently lost one of the best Cadillac drivers of all time, Hank Aaron. 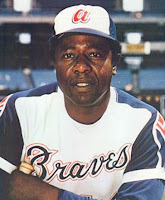 I was fourteen years old when Henry Louis Aaron nicknamed "Hammer" or "Hammerin' Hank" hit 715. Aaron is regarded as one of the greatest baseball players of all time. His 755 career home runs broke the long standing MLB record set by Babe Ruth and stood as the most for 33 years.

Aaron (then age 39) ended the 1973 season one home run short of the record. He hit home run 713 on September 29, 1973, and with one day remaining in the season, many said his only fear was that he would not live to see the 1974 season. Aaron was the recipient of death threats and large assortments of hate mail during the 1973-1974 offseason. Many newspapers quietly had an obituary written, afraid that Aaron might be murdered before he could hit 715. 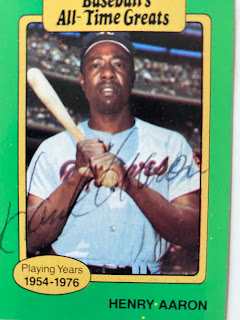 Growing up, Baseball was my sport. And I hit a few home runs during my "baseball" career. And that included three Grand Slams. I was not good enough to make the High School team in Boca Raton, Florida in the 70's but I came close. It was a big school, and the competition for first string "catcher" (my position) was fierce. I did however, resume hitting home runs in my late 20's playing Men's Adult League Softball. There is no feeling in sports like hitting a home run.

When I was young, I read a book about Hank Aaron and it had his home address in the book. You could mail a self-addressed, pre-stamped envelope to his home - and he would return an autograph. Stop and pause for a second. You could send mail to the home of Hank Aaron, and get a reply, with an authentic autograph. Ah yes, the world was a much simpler place when I was a kid. 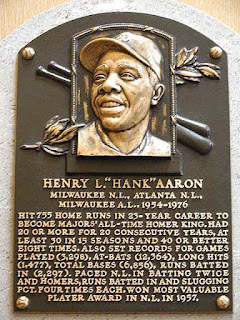 Many years after his retirement, I met Hank in person. He was a spokesperson for cellular phones, and we were pursuing Hank to do a TV commercial. I called the phone number expecting to get a receptionist. "This is Hank" was the voice on the phone. He answered the phone himself - on the second ring, and we spoke for almost an hour. He was an amazing businessman, and he was concerned about how his brand would be represented.

I did not think about Hank for many years, and with his passing this past week, my flood of memories hit me. I still have his autograph from when I was playing Little League. I still have the copy of the signed agreement for the TV spot for Cellular One. When I did finally meet Hank in person, he was many years into retirement from the game.

After Barry Bonds hit his record-breaking 756th home run on August 7, 2007 Aaron made a surprise appearance on the JumboTron video screen at AT&T Park in San Francisco to congratulate Bonds on the accomplishment:

"I would like to offer my congratulations to Barry Bonds on becoming baseball's career home run leader. It is a great accomplishment which required skill, longevity, and determination. Throughout the past century, the home run has held a special place in baseball and I have been privileged to hold this record for 33 of those years. I move over now and offer my best wishes to Barry and his family on this historical achievement. My hope today, as it was on that April evening in 1974 is that the achievement of this record will inspire others to chase their own dreams."

I pause here and reflect how of the two men, Barry Bonds and Hank Aaron, only one of the two has been elected to the Baseball Hall of Fame.

Aaron was reluctant to attend any celebration of a new home run records, based upon his personal conviction that baseball is not about breaking records, but simply playing to the best of one's potential.

Life lessons all around. Play Ball! 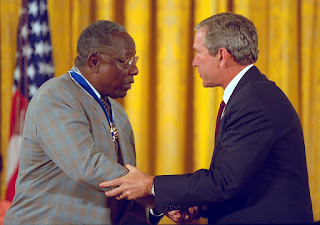 Aaron accepting the Presidential Medal of Freedom
from US President George W. Bush in 2002 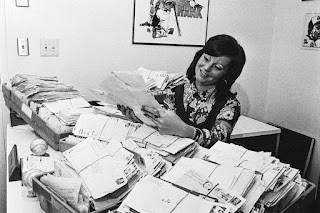