Nothing strikes fear in the hearts more than hearing a Mom shout out to the rest of the family: COMPANY IS COMING!!!

My stress level goes up just hearing those words. But what happens when “the company” coming to your home is - an actual COMPANY?


This past week, members of NYDLA.org attended the COLLISION conference - from their homes.


We have always enjoyed attending LIVE events. Heck, we LOVE attending live events, especially in New York. Having the Javits Center in our "Big Apple" backyard is one of our superpowers at “NYED-LA” as the world would come to us. I used to joke that I could go to Javits Center in New York City EVERY DAY, as there was ALWAYS something cool going on. I live 25 miles west of Times Square, so I can "pop in" for an event or conference in the city anytime. Yes, I am spoiled. And when we say "The City" we all know we are talking about NEW YORK CITY. You know, the center of the known universe. 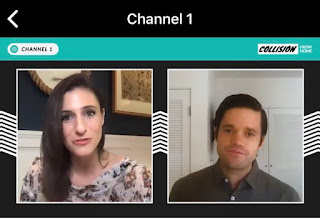 I really wanted to go to Toronto for COLLISION. We were all set and ready to go. I have attended and supported COLLISION (a Web Summit event) every year since 2016. We expected 30,000+ to meet up in Toronto.


And then comes COVID-19. Times may be uncertain, but one thing remains true. People enjoy coming together. There is a power in people coming together. No matter the time zone, humans are social creatures.


Web Summit is a company from Dublin, Ireland that holds events online and across the world - Web Summit, Collision and RISE.


Forbes: “The best technology conference on the planet.”
The Atlantic: “Where the future goes to be born.”
New York Times: “A grand conclave of the tech industry’s high priests.” 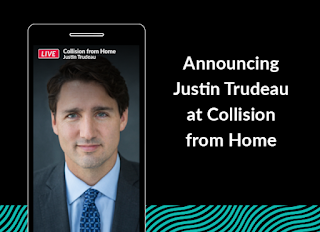 When I learned that COLLISION was going to NOT be cancelled - but was going to become a VIRTUAL event, I was actually very worried. Since March we have witnessed so many LIVE events try to salvage their investment by converting their LIVE event into a VIRTUAL event. Most were not very good at all.


Folks, I have been in the MEETINGS & EVENTS space for many (many) years. The MEETINGS & EVENTS game is hard. It’s difficult. It’s expensive. It’s complex. Running an event (of any size) is an art form. I have seen so many try to pull off a VIRTUAL event during the pandemic, and they failed. They tried to salvage their live event, and they should have just canceled.


Yes, I was worried that COLLISION was going to get a black eye. Who do these guys think they are? Are they so full of themselves that they can pull off a VIRTUAL event where so many others cannot? Do they think they are smarter than everyone else?


Turns out they are smarter than everyone else.


These numbers are shocking. This event, during a quarantine, was the best event that I have attended in years. I did not say best VIRTUAL event, I said the best EVENT. Period.


Paddy Cosgrave, the founder of COLLISION and its parent Web Summit rolled the dice and they won. Big time. The future of MEETINGS & EVENTS was coming for all us, sooner or later. But the pandemic forced their hand. When any of us go to an event live, we are looking to maximize meaningful connections. How can you replace features of LIVE events, like meeting booths or round-tables or break-out sessions with software?


There were no virtual event technologies (to date) that could properly do the job. In record time, Paddy’s team created a platform to make VIRTUAL events as good as live. In my humble opinion, this was better than a live event. Panel Discussions. Fireside Chats. Break-outs. They had it all. I was impressed, and I'm a very tough critic. 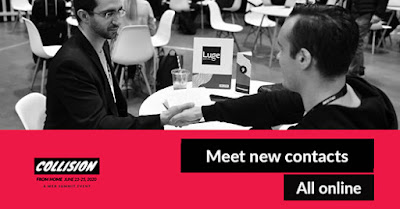 There was a feature called “Mingle” that was like speed dating for business. Every three minutes I was matched up with people (from all around the world) who were hand-picked for me. Based on my profile, I had hundreds of people join me - in my home - to exchange contact information, and chat via HD video. It turns out that three minutes is just the right amount of time to make a new friend, and connect on LinkedIn and social media.


Were there some bugs? Sure. It is not easy to host a global virtual event on a new platform that you built from scratch in record time, during a pandemic. But once you got past the minor bugs, it was flat-out AMAZING. It turns out that Paddy and his team were actually building software to network virtually at their live events for many years. Like for ten years. No software, no matter how powerful will fully replace true face to face contact. But during a pandemic, the platform that I just witnessed is indeed the future of the meetings & events world. I cannot see ANY events (LIVE or VIRTUAL) not being a hybrid moving forward. The most expensive part of going to conferences is not just the cost of the ticket but the cost of travel, hotels, food, etc. Even after the world returns to normal (and what is normal?) VIRTUAL EVENTS are here to stay.


In a tweet last week Paddy said that he is thinking of offering access to their online conference platform to 3rd parties who organize large, bespoke events. NYDLA.org members, vendors and sponsors: are you listening? 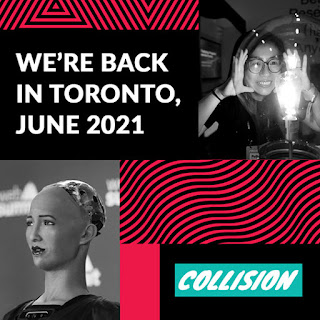 
Thank God no one at COLLISION asked me for my opinion.


Maybe COLLISION should simply be called COURAGEOUS moving forward? Or how about a new nickname: Paddy “Courageous” Cosgrave?

Besides, I need to get busy and follow up with a few hundred new friends who came to my home last week. Thanks to Paddy, we had…company. Yes, we had “company” to our home, during a pandemic. No masks required.

Posted by Thomas Capone at 6:49 AM