People first, then money, then things.

Thomas Jeffrey Hanks began performing with the Great Lakes Shakespeare Festival in 1977, and later moved to New York City. He starred in the television sitcom Bosom Buddies, but later became far more known when he starred in the Ron Howard film Splash.

Last night my wife and I watched "A Beautiful Day in the Neighborhood" on Amazon. It was $2.99 to rent, so what the heck. The secret to life is a happy wife, right? It was not going to be my first choice.

Lloyd Vogel is an investigative journalist who receives an assignment to profile Fred Rogers, aka Mister Rogers. He approaches the interview with skepticism, as he finds it hard to believe that anyone can have such a good nature. But Roger's empathy, kindness and decency soon chips away at Vogel's jaded outlook on life, forcing the reporter to reconcile with his own painful past.

Spoiler Alert: There is a scene in the movie where Vogel and Rogers are on a crowded subway in NYC. Slowly everyone on the subway recognizes Mister Rogers, and the entire subway breaks out into song - the Mister Rogers theme song. 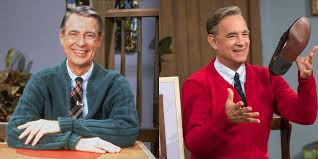 After the movie ended, I just sat there and reflected. I tried to remember all of the Tom Hanks movies, without the aid of Google. And then I thought about the roles. From Josh Baskin to Joe Banks to Forrest Gump to Jim Lovell to Sheriff Woody. From Captain Richard Phillips to Walt Disney to Chesley "Sully" Sullenberger.

Tom Hanks and his wife Rita Wilson are feeling better after being treated for coronavirus. They were in Australia for pre-production work on a film about singer Elvis Presley. Hanks is set to play Presley's manager, Colonel Tom Parker.

Many years ago, I met Tom Hanks and Rita Wilson at a Birthday Party for Senator Ted Kennedy at the St. Regis in NYC. I sat at a table with Tom and his wife Rita, the comedian and actor Chevy Chase, Lauren Bacall, John F. Kennedy Jr. and his wife Carolyn Bessette-Kennedy. FYI, the "Birthday Party" was really a fundraiser, so I was invited as long as I brought my checkbook along as my "plus one" guest. Basically anyone with security clearance (and a check) could attend the party.

What I remember the most about that night was how warm and open Tom Hanks was. He asked me "What do you do?" and I said I was the head of talent at Disney. Then I said, "Ha, no, just kidding, I sell cellular phones, since 1983." Well, Tom was fascinated and we chatted it up for an hour. And I made a sale.

Chevy Chase was aloof. John F. Kennedy Jr. was shy. But Tom Hanks was so real, so genuine, so human.

There is another scene in the movie where Fred Rogers says to Lloyd Vogel that "the most important thing in the world (at that moment) was him speaking with Lloyd Vogel on the telephone."

I was reflecting how our view of heroes might change, pre and post COVID-19. Will we still worship people who score goals, or touchdowns, or hit 3-pointers, or home runs, or people who can sing or dance or act? Will we still go "gaga" over Lady Gaga?

What (and who) will be important to us - post coronavirus?

Tom Hanks said during his coronavirus recovery: "Thank you so much to all the helpers. The real heroes in our lives are the helpers."

I hope that we indeed change who we worship as heroes, don't you?

People first, then money, then things.


"When I was a boy and I would see scary things in the news,
my mother would say to me - Look for the helpers. You will always
find people who are helping." - Fred Rogers