Are your pants flammable or inflammable? 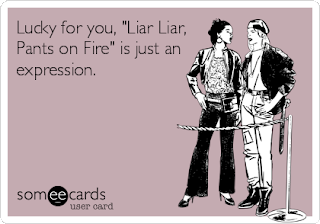 First of all, flammable and inflammable do not mean the same thing. If your pants are flammable, it means they can be set to fire, such as a piece of wood. However, inflammable means that your pants are capable of bursting into flames without the need for any ignition. The opposite of both words is non-flammable.

Most people would say that lying is bad. I remember studying Immanuel Kant while at PURDUE and it was thought that lying is always ALWAYS unacceptable and wrong. Like you should never, ever lie. Period.

I could make a longer list. And I am sure that really smart people can give compelling reasons why even with really good reasons - it is never, ever OK to lie.

Liar Liar is a 1997 comedy film with Jim Carrey who plays a crooked lawyer Fletcher Reede. Through the magic of the movie, Fletcher realizes that he cannot lie - he can ONLY speak the truth at all times, no matter what. Think about a lawyer unable to ask questions if confident of a false response. The movie is funny because the premise of an attorney who CANNOT LIE is so absurd.

Anyone watch the impeachment hearings this week?

Perjury, the crime of not "telling the truth, the whole truth, and nothing but the truth" is a serious offense because it can derail the basic goal of the justice system - the goal of discovering the truth. Is a lie by omission still a lie? Paltering, or using truth as misdirection is considered to be just as ethically rotten as telling a bald-faced lie.

The video below is going viral on the Internet this week. It is worth watching - try to fit it into your Thanksgiving break. I am not a huge fan of Sacha Baron Cohen the actor, comedian, screenwriter, director and film producer. But I think I would like to shake his hand and buy him a beer.

As we enter Thanksgiving Week here in the USA, I think we should be truly thankful that we are even allowed to watch this video without living in fear of retribution. I still believe with all my heart that the USA is the greatest country in the world.

But I also believe that we are still a work in progress. We can do better, and we shall do better. We get the leadership we vote for so VOTE! And, we also vote with "our money" when at the store, or online.