Last week, I was invited by a friend to a VIP event in NYC. It was the grand opening of a bank branch, their first in New York City. It was a bank that at this point, I never heard of.

I had no reason to be in New York City on that day. This would be a special trip to the city. After vacillating back and forth, I agreed to go to the event. You would think that by now I would have learned my lesson: when you get invited to something, especially a VIP event, you go.

Last year I was invited to present at the NYC WordPress Users Group. Even with 30,000 members, they had no budget for a speaker. I would be doing this event for free. Including paying for my own transportation.

Well, I do love public speaking. When it comes to public speaking, some people would rather be in the coffin than to be giving the eulogy. For me personally, I tend to be mortally offended if I don't get my turn with a microphone.

So, I did the gig for free. It turns out that someone in the room liked what I had to say. It turns out this person was very close with John Catsimatidis, an American billionaire businessman and radio talk show host. John just recently purchased WABC Radio. And all things "media" (especially podcasts) is a big part of the NYDLA community.

It was that same WordPress friend that invited me to last week's Republic Bank grand opening event. I almost didn't go. But I do love dogs. And I'm a big fan of Tom Peters, the co-author of In Search of Excellence. Tom was connected to Vernon and I am connected to Tom and he said quickly and with conviction: GO. 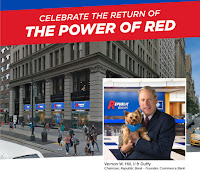 Vernon Hill is the founder of Metro Bank UK and Commerce Bancorp. Hill founded Commerce in 1973. It became the fastest growing bank in the US before being sold for $8.5 billion. Vernon is also the Chairman of Petplan.

I don't have the time to tell the entire story of what happened last week, but things are now moving very fast. As of today, Republic Bank has one branch in New York City. And the NYDLA shall be hosting "Sunset Seminars" at the branch for our entrepreneurial members. Something tells me there will be other branches opening in The Big Apple. Many. I see the pattern of success - it will be fun to watch it unfold.

I read Vernon's book this weekend. I could not put it down. Vernon describes how to create growth companies by building FANS! Not Customers with:

From 1973 to 2007, Vernon led the growth of Commerce Bank from 1 to 440 stores with a 30+ year, 23% per year compounded shareholder return. Vernon says: "Give the customer legendary service, and one day your company will be a legend, too. BE ALL YOU CAN BE."

I will be telling everyone that I know to check out Republic Bank. And until further notice, everyone who joins the NYDLA.org shall be getting a free copy of Vernon's book FANS! Not Customers - How to Create Growth Companies in a No Growth World.

But to be totally honest, Vernon had me at loving dogs. 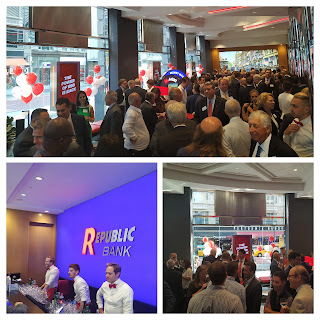 Posted by Thomas Capone at 9:17 AM