It's easy to switch to Gmail!

Did you know that Gmail was voted #2 in PC World's Top 100 products of 2005, right after Firefox? Why wouldn't you want to switch? Well, because it can be a pain to switch to a new email address. We know. But, it doesn't have to be. We want to make it easier for you. So, we've created a new switching guide to make the transition easier. The guide covers how to:
There's even personalized help for switching from the email service you no longer care to use. But if you're not ready now, we understand. Play around with Gmail for awhile. Send and receive some messages. We think you'll like it (you might miss all that spam, though). And, when you're ready, the switching guide is in our Help Center.
Change is good. It can be easy too.

Thanks,
The Gmail Team

Wow. The above is the actual welcome email that I received from The Gmail Team, on November 21st, 2006.

The links from the original welcome email still worked. You can still read about them bragging about being the #2 product - AFTER Firefox.

I just noticed that I have 555,478 emails archived in my all mail folder. And that huge number is AFTER 15 years of deleting junk, spam, and erasing emails that I truly felt that I would never (ever) need again. This "pack rat" feature of Gmail never really hit me, until just now.

Gmail, is a time machine.

Gmail has become a snapshot of over a quarter of my life. Relationships, trips, adventures. The wins, the losses, the lessons learned.

And here is a lesson I learned from looking at my Gmail archive: Everything is obvious, given enough time.

It's hard to believe that Gmail celebrated its 15th birthday on April 1st. Debuting on April Fool's Day in 2004 - when given that date, many people thought that Google was pulling our leg by announcing a free email service. Gmail's launch came three years before the iPhone was a thing and a couple of years before the launch of Twitter. Today, Gmail is the premiere free email service, a centerpiece of the workday for countless professionals.

Once it became clear that Gmail was real and that it was not an April Fool's joke, invitations to Gmail became highly desired. Back then a friend had to invite you to Gmail. Although this invite only gateway was originally born out of necessity, it created an aura of exclusivity which contributed to its publicity windfall. Everyone wanted it even more. We always want what we cannot have, right? It was hailed as one of the best marketing decisions in tech history. But limiting access to a new Gmail account was actually unintentional. Google could not handle the volume - Google was not 100% certain Gmail was going to be a success. So, they only had it loaded on a few servers. Limiting access was not for marketing purposes.

Yes indeed. Everything is obvious, given enough time.

If you have a Gmail account, I invited you to look at your oldest archived emails. And then scroll forward in time. You might also say to yourself:

I remember that! Oh Jeez, what was I thinking. Oh, wow, I am still doing business with them. Wow, that project was a dead end. Hey whatever happened to them? Ya know, I should give them a call.

In the Spirit of Gmail's birthday (April 1st) I just found the emails from 2006 with the subject line: "Meeting for Coffee"

And I just replied to all of those invites for coffee from 2006 with:

"Hey, sorry I've been swamped. How about this week?" 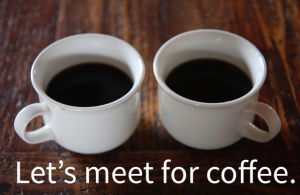