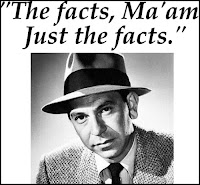 Joe Friday never said it. If you are old enough to remember the TV show "Dragnet" then you know the catchphrase "Just the Facts, Ma'am"

But he never said it. Not on the show. A PARODY of the show first used the phrase. But not Joe Friday.

I learned of this fact, because I Google the word "facts" and "Just the Facts, Ma'am" was the number one hit.

[No, it was not really the number one hit on Google. But you won't check it out for yourself, so who cares, right?]

We read things on the Internet, on social media, and then after liking the posts and sharing the posts and re-tweeting the posts, we find out that the post was false. Or less than factual. But it is too late. Truth and facts lose out to speed and volume.

I was about to say "A lie can travel around the world before the truth can put on it's shoes" ~ Mark Twain. But it looks like it was Winston Churchill who said it, and it was pants, not shoes.

USAfacts.org is a cool website founded by former Microsoft executive Steve Ballmer. It is all about the facts. The truth. It is a very useful website (especially at election time). You should check it out.

But I have no idea if Steve Ballmer is actually even connected with, or has anything to do with the website. Truth. Facts. What does that even mean any more, when lies travel at the speed of light?

We always say that we want the truth. The truth, the whole truth, and nothing but the truth. But can we handle the truth?

Last one:  What percentage of people vote?

Google says about 60% of the eligible voting population votes during presidential election years, and about 40% votes during midterm elections.

Is that true? Is that a fact? How do we fact check the fact checkers?

Where is Detective Joe Friday when we need him..... 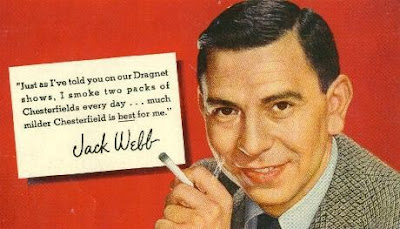 Posted by Thomas Capone at 9:02 AM