I can predict the future, and I can prove it. Millions of people will purchase 12 month health club memberships on 01/02/2014. These savvy shoppers will go to their new health club a few times in January, never to return. And these same people will do it AGAIN every so many years (purchasing health club memberships - never using said health club memberships). Brilliant.
People will go to work on 12/02/2013 (tomorrow) and no matter what their company policy - these loyal employees will spend many hours online, shopping. Not working from their cubical, but shopping from their cubical. Heck, we have faster Internet at work, right?
If you want to predict future behavior, just look at past behavior. We all know this is true, it is common sense. But never in recorded history has it been easier to track human behavior, with “big data” and the power of the Internet. It is so easy to see the future. And even when you can clearly see the future (good or bad) we are powerless to change it.
Or are we?
Why will someone leave their warm cozy home to stand in line (in the cold) to get a “door buster” bargain on something that is going to be a gift for someone else? Why do corporations risk public ridicule opening their stores on what was previously a national holiday? If I sold fuel oil for your home at 25% off would you stand in line at midnight (in the cold) to grab that bargain?
As of this blog, the www.Healthcare.gov website has the following message:
The Health Insurance Marketplace online application isn't available from approximately 1 a.m. to 5 a.m. EST daily while we make improvements. Additional down times may be possible as we work to make things better. The rest of the site and the Marketplace call center remain available during these hours.
Now please, put your love / hate of the Affordable Care Act to the side for just a minute. Let’s just focus on the technology.
In the past 90 days, no website in the world has had more news coverage than www.Healthcare.gov.  This website has become the top news story. Because it did not work, it became news. It could not handle the traffic. The online store for health care was broken, and the best minds in the most technologically advanced country in the world could not make it work. One day, the eCommerce site for Obamacare will be the topic of discussion in major business schools, but for today, this eCommerce showcase site is still not ready for prime time. USA! USA! < sigh >
Because www.Healthcare.gov could not handle the traffic, the quick fix was to ask people to please log in during low traffic hours - please use the site in the early morning, or late at night. Please don’t use the site during typical high traffic hours. We simply cannot handle the demand, please work with us. Thank you.
< Insert hysterical laughter here >
Has no one heard of Cyber Monday? Black Friday? And now Brown Thursday? Humans are the most predictable of creatures. We will stand outside in the cold to get a Smartphone on sale. We will risk losing our jobs, shopping online while at work, challenging our bosses to try to stop us. What did you think would happen, when you asked people to come back and shop for health care during low peak hours? I am still laughing, are you?
I have seen people sleep overnight on sidewalks to get a new iPhone. I have seen people leave their warm, safe homes - leave their families and relatives that they only see once a year, to shop on Black Friday / Brown Thursday. These are the same people that you are asking to log in during low traffic hours. What were you thinking?
People want what they want -and they want it NOW! 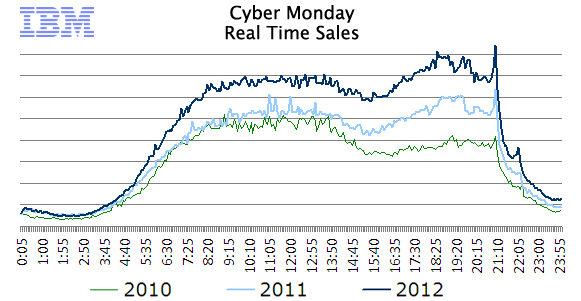 
Cyber Monday 2012 was yet another historic day for the online retail industry. With double digit sales growth and initial sales reports roughly in the $1.5 to $2 billion range it’s no surprise more records were once again broken this year. The major difference between Cyber Monday 2012 and previous years is primarily the exponential growth of mobile shopping, likely a key catalyst behind at-home sales overtaking workplace sales for the very first time. As the online retail industry continues to evolve, days such as Thanksgiving and Black Friday will likely continue to see strong online sales growth as multi-channel retailers continue to unify their online and offline promotions. Posted by Thomas Capone at 7:25 AM