The modern Olympics are different than they were just a century ago because of technology. In 1900, when American Francis Jarvis was declared the winner of the 100 meters, he was said to be "the winner by one foot from Walter Tewksbury, who beat Australian Stan Rowley by inches". It was not until the 1932 Olympic Games in Los Angeles that officials began using stop-watch and camera technologies to record results. After a delay of several hours, if stopwatch technology could not determine a winner, judges were provided newsreel footage to determine a winner.


Technology of all types has changed the nature of the Olympic Games. This includes the equipment and apparel used by athletes, and the devices available to judges to determine winners.

Example: the javelin event had to be modified and the shape and materials of the javelin were changed, as athletes throwing over 100 meters were putting spectators lives at risk. I get the point, do you?

From hydrodynamic swimsuits to electronic real-time coverage of the games, technology has radically changed the Olympics for athletes, judges and spectators. More now than ever, technology is playing a significant role in today's world of sports, and technology will most certainly play a part in rewriting some of the record books.

Timing is now down to fractions of seconds. It used to be the first one to cross the finish line and everyone ran at once. Now they run heats allowing everyone to have a clear track to run on.

Uniforms, shoes and goggles are all scientifically designed to provide the least resistance and best grip. Games are designed and held to maximize media exposure to allow competition to be watched around the world. 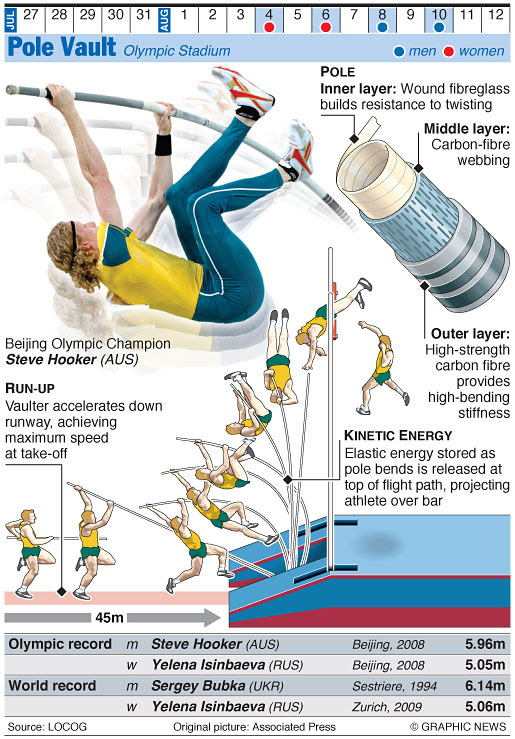 And the best athletes in the world can be gathered together in a matter of days, instead of weeks of travel. You can train at home until the last minute, and then arrive just in time to compete.

London 2012 is the first 3D Olympics, with wall to wall coverage available variously in HD and ultra-HD, on tablets and on mobile phones and on radio and television around the world. Footage will be produced by the Olympic Broadcasting Service, with the BBC holding the UK rights and NBC the American. The output could scarcely be more different from that for the 1948 London Games, which were the first to be broadcast: then just 64 hours was produced, and it was available to just the 500,000 people with access to a TV who lived within a 50-mile radius of London.

Beijing 2008 produced 1,500 hours of TV coverage. London will produce a total of 2,500 hours and the BBC offers 24 lives streams of HD video. In London, they have public availability of so-called Super Hi-Vision, or ultra-HD. It is 16 times the definition of HD and offers 22 channel sound. Available on special HD 3D screens in London, Glasgow and Bradford, it’s as close to being at an event as television can achieve.

The highlights could be the Games’ greatest impact on consumers. Developed by Adobe and being used by both NBC and the BBC, this technology allows users to go back to which moment they want to see. If you’re waiting for someone’s next dive and you want to see his last one, you can go back to just the right point. So rather than rewinding, clips will be tagged at specific points so users can skip back or watch packages that the broadcasters can prepare in real time.

This will change the way people watch sports (NFL, NBA, etc.) on devices forever. The Adobe video, which uses several pieces of software all under the banner ‘Project Primetime’, will be available on all platforms, including mobile phones, TVs, tablets and computers.

At the Olympics
Across the 500-acre site, 30 new mobile phone masts have been assembled, with 14 inside the buildings. BT claims its WiFi installation is the single largest in the UK, comprising some 1,000 hotspots that will be free for users. It remains to be seen if the networks will cope with the 300,000 users that could all be trying to log on. BT says it expects to be able to handle peak traffic of 1.7 gigabits per second, which is equivalent to 13,200 web page downloads each minute. Users will be able to browse the web, catch up with the action and – hopefully – actually phone people too. The scale of the even will make things difficult, but the lessons learned in London could prove a boon subsequently to all future major events, where mobile signals are often problematic.

Military lasers: Track Cycling
British Cycling’s ruthless pursuit of success has often been compared to a carefully prepared military operation. The biggest home medal hopes have been using equipment developed by BAE, the weapons manufacturer. The technology centered on how riders are timed as they complete circuits of their training. Traditionally, timing systems have relied upon ‘break beam’ lasers which record a rider’s time whenever they break a beam. The new system was originally designed for use on battlefields to reduce friendly fire, allows a laser beamed from a trackside device. Each individual rider is tracked via a personal code placed on a reflective tag on their leg. A rider’s split times can now be measured to the millisecond. In cycling, some have lost world championships by thousandths of a second so being able to measure time accurately is fundamentally important.

Waterproof nano-coating: Sailing, Mountain Biking
Great Britain has a golden record in Olympic sailing, having topped the medals table at the last three Games, but with rivals such as Australia and the United States pushing hard to cut the gap in London, the hosts have had to turn to increasingly sophisticated forms of technology to preserve their advantage. The latest development sees an invisible ‘nano-coating’ - ordinarily employed to protect soldiers from chemical weapons - applied to a sailor’s equipment and clothing before they go on the water. It forms a layer which allows air to penetrate - keeping the sailors cool - but repels water, meaning droplets simply run off rather than being absorbed into the material and adding extra weight that could slow down the boat. The same technology is being used by mountain bikers and could have even more significant results. Tests have shown that taking on an extra kilogram of mud and water can slow times by up to 15 seconds.


Better Technology, Better Speed, it is just that simple.


I think I just won the Gold Medal for sarcasm.

There are 204 countries that are competing in the Olympics - 2012 London.